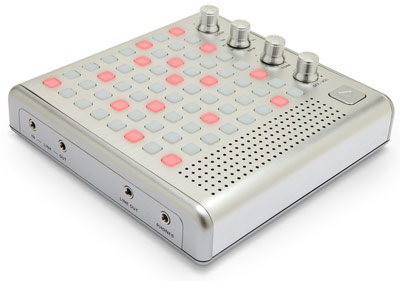 Always wanted a digital synthesizer but can’t help but balk at their prices?  Join the club.  Then, turn your attention to the Bliptronic 5000 LED Synthesizer, a $50 box that pumps out retro-style 8-bit tunes.

With a face partly ripped off from the full-featured Yamaha Tenori-On, the music-making gadget makes turning out licks fairly straightforward.  Using a pattern-based approach to playing, it ditches all the other complex capabilities that usually comes with sequencer rigs (no MIDI, no in-depth editing), keeping the whole thing simple (not to mention, cheap). 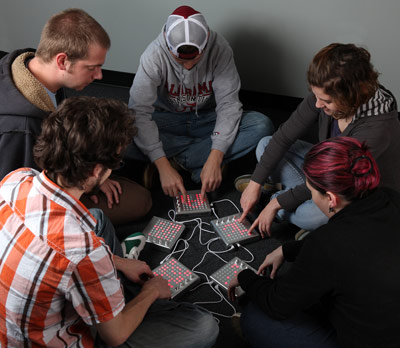 Each backlit button on the Bliptronic 5000’s 8×8 array triggers a note (push to turn on and off), with each vertical row representing one octave.  Songs revolve around a constant four-beat pattern whose pace you control using one of the side knobs.  Want to play a chord?  Press the corresponding notes on the row at the same time.  The entire pattern will play till the end of the sequence, at which point, it repeats again.  To tweak the audio, simply turn off specific notes at any point.

Apart from the controls, it comes with eight different synth-sounding instruments to choose from, as well as onboard stereo speakers, a headphone jack and a line out.  Want more complex melodies?  Simply connect an unlimited number of Bliptronics together in a daisy-chain configuration and you’re good to go.

Sure, it won’t turn the musically-disinclined (like yours truly) into a half-decent musician.  But put it in capable hands and you can turn out crazy numbers without doing a whole lot of complicated work.  It requires four AA batteries to operate.  Check out the video below to see it in action.