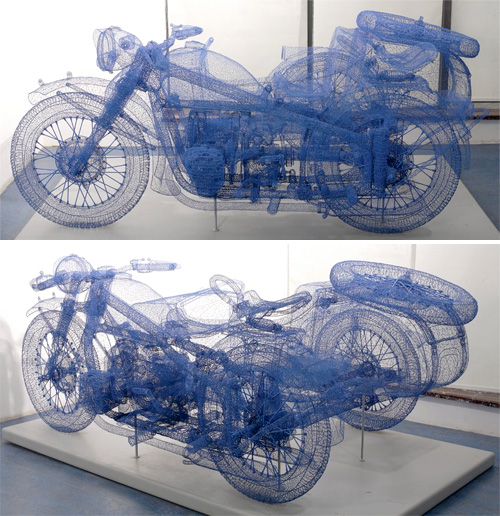 If you can make the Blue CJ750 move, you can literally roam the streets looking like a badass superhero.  I mean, look at it – the motorcycle with sidecar mesh is even more awesome than how they used to draw Wonder Woman’s vehicles in the old cartoons.

Designed by China’s  Shi Jindian, the wireframe sculpture is directly based off the Chiangjiang 750 motorcycle, a sidecar-hauling military vehicle that bears a striking resemblance (because, you know, the Chinese rip off everything regularly) to the 1937 BMW R71.  It joins the artist’s roster of wireframe creations, which range from musical instruments to machines of various kinds.

More amazing than looking at the Blue CJ750 is hearing how it’s created.  According to Shi, he started out by wrapping wire meshes around the bike to accurately capture its form.  Once that was done, he extracted the object inside the mesh piece by piece, leaving only the exoskeleton mold in its place.

How he was able to remove an entire bike from inside a wire assembly is just one of the confounding tricks here.  As always, I propose voodoo magic, although Chinamen have never been known to dabble in such Carribean witchcraft.  Magic zen kung-fu, perhaps?  Whichever the case may be, the result looks insane.

Shi says the Blue CJ750 took him three years to finish, which isn’t that surprising given the amazing detail of the elaborate wireframe sculpture.  Plus, he probably didn’t use voodoo, which could have easily sliced that labor time in half.  I mean, magic zen kung-fu is good for flying kicks and fancy spins, but it doesn’t exactly lend itself well to building sculptures.