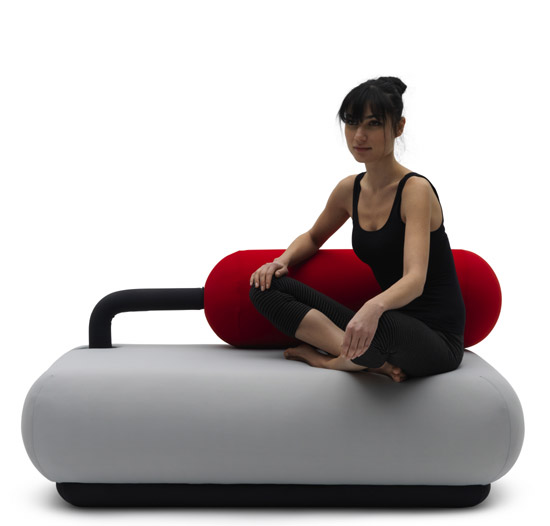 Remember that awesome Table Tennis Door? The man responsible for it, German designer Tobias Fraenzel, is back to his old, clever ways with a new out-of-the-mold creation. Called the Champ Sofa, it’s a comfy couch with a backrest that swivels into a punching bag for releasing all your pent-up aggression on.

Every time I watch the UFC on pay-per-view with my buddies, someone (usually a friend of a friend) eventually gets up and begins making fighting motions. I blame the beer, but men beating up on each other round after round does tend to have that effect on people. Sure, it looks stupid, but we always egg the drunks on cause it makes for fun interludes, especially when watching boring wrestlers who hump each other for 15 minutes. 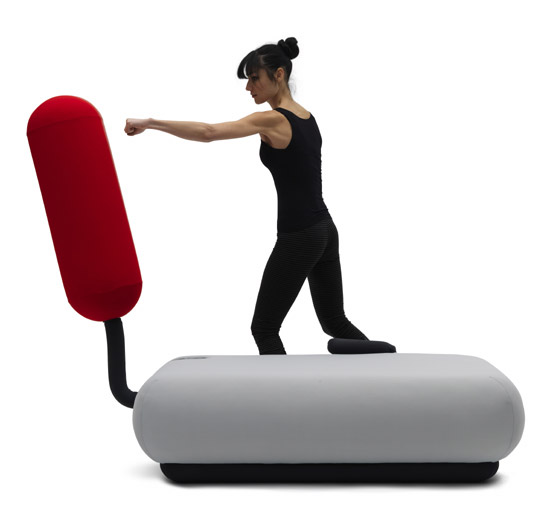 Well, the Champ Sofa should encourage even more of that behavior, because of its clever side-function. While it plays a plush-looking sofa for you to stretch legs on, you can easily lift up the back frame and fix it to a vertical position, which then transforms the cushion into a functional punching bag. Instead of shadow-boxing, you can then take turns kicking and punching a steady target. Fun.

Commissioned by Italian furniture maker Campeggi, the sporty Champ Sofa was shown off during Milan Design Week 2010. No word on when it will be produced and for how much, but I will definitely consider one. Should give me a nice place to vent all my frustration while watching those annoying cliffhangers primetime shows seem to have taken a liking too. Bastards.