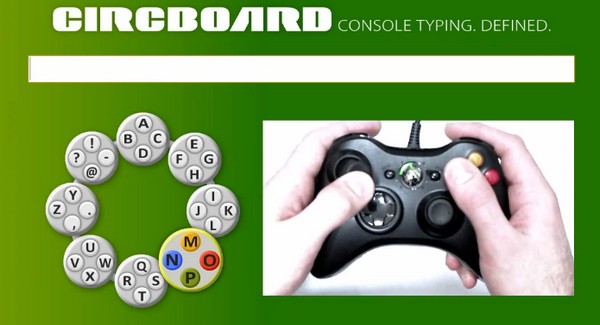 Using a console controller to type any kind of in-game text is a frustrating experience.  Unless you’ve already gone ahead and bought a QWERTY attachment, of course.  If you’d rather not add another plastic accessory to your gaming rig, the Circboard just might be your salvation.

Designed to make data entry through a console controller easier and faster, the innovative onscreen keyboard splits keys into groups of four, set up in a round layout that corresponds to analog directions.  That way, you can navigate to a character quickly using just the left analog stick (or the D-Pad), tapping one of the buttons to grab a specific one.

All letters and common punctuations are included in the Circboard layout, which gives you access to any character at even speed (two analog movements and one button press). Shoulder bumper buttons handle space and backspace, while locking on the left trigger does caps.   Numbers and special characters can be accessed from the right analog stick, although that feature is still in the works.

Suffice to say, the video below makes the whole thing look painlessly simple — something we can’t say about the numerous data entry solutions we’ve seen on console games so far.  Unfortunately, it’s only a demo for now, but the group says they’re trying to get it into games and apps on both the Xbox 360 and PS3 platforms.

In all seriousness, Circboard can’t come soon enough.  A sensible way of typing on consoles has long been needed and this looks like the most viable solution to come so far.