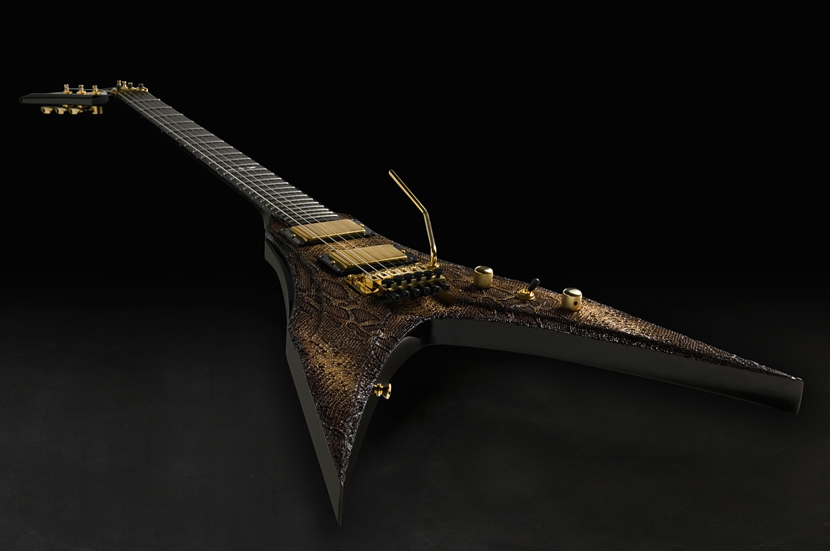 We love snakes.  Even though that Snakes on a Plane movie sucked reptilian eggs, I still managed to watch it three times, cursing along with Samuel Jackson on each one.  Popular guitar maker DBZ Guitars sure knows how to tug at my heart.  Yep, its a snake on a six-string – the DBZ Venom Snake Skin, a pointy axe with a scaly-looking body that’s guaranteed to get PETA boycotting your next gig.

But, alas, the snake skin is fake. Which is actually cool, but kind of deceptive at the same time. All scale and no venom. It’s like riffing through a passionate black metal number complete with Alister Crowley chants, corpse paint and pig’s blood, only to claim you’re just doing everything for show. You know? This 12-year old won’t be buying anymore of your pansy-ass records, mister. I want real hooded warlocks supplying my scary music, dammit. 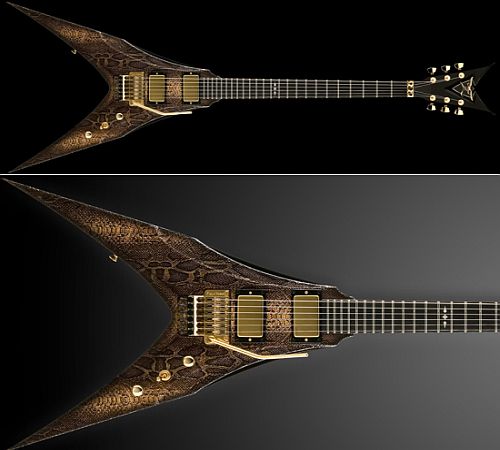 I guess skinning an actual snake is too much to ask for from a lifelong vegetarian such as guitar-maker Dean B. Zelinsky, for whom the DBZ actually stands for (yes, not Dragonball Z, which really sucks). The instrument comes with a slew of upgrade options, including all-gold hardware, etched snake skin, Signature pickups and and a string-thru-body fixed bridge.

Slated to hiss its way to MusikMesse 2010 this coming week, the DBZ Venom Snake Skin guitar is priced starting at $4,599.