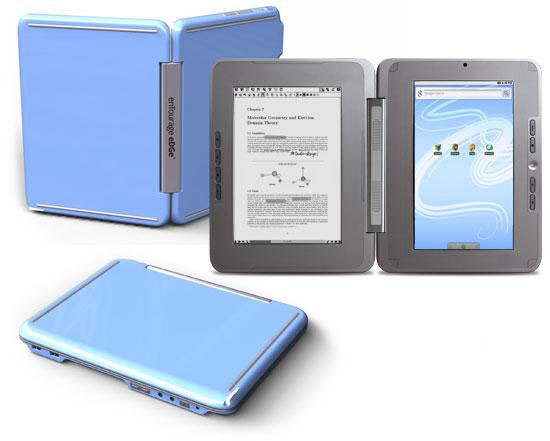 Why settle for an ebook reader when you can get a full UMPC with it?  That’s the whole selling point behind the Entourage Edge, a clamshell-style device that opens to two large displays on each flap.

Able to unfold like a netbook (and it does look like one when closed), the nifty two-in-one integrates a grayscale e-reader on the left side and a functional Android-based UMPC on the other.  Both screens display in an upright format, so you can grab it with both hands like an actual book.

The Edge features two relatively large displays, a 9.7-inch e-paper screen and a 10.1-inch LCD.  Both panels are touch-sensitive (it comes with a stylus) and can be folded a full 360-degrees (yep, so you only look at one screen).  It can handle both PDF and ePub formats, apart from running a full version of Android, so you can use it for regular computing activities, like web browsing, communication and basic multimedia.  For connectivity, it comes with both Wi-Fi and 3G support.

More than just a textbook replacement (as e-readers have been marketed to do), it appears to be going after full-fledged laptops too.  The hardware suite includes speakers, an audio jack, a 1.3 megapixel webcam (yep, they’re touting it for video calls), a noise-cancelling mic (that claims to pick up voice cleanly from 30 feet away, so you can record lectures) and Bluetooth (with support for wireless keyboards).  Onboard storage is limited to 4GB, though, but it comes with a USB port so you can plug in external storage.

If the Entourage Edge can run Android fast and play multimedia in decent fashion, I really just might trade in my netbook for one.  Sure, it’s not a full-fledged PC, but when did we really use a 10-inch PC for anything heavy?  It’s going to be available come February 2010 for $490.