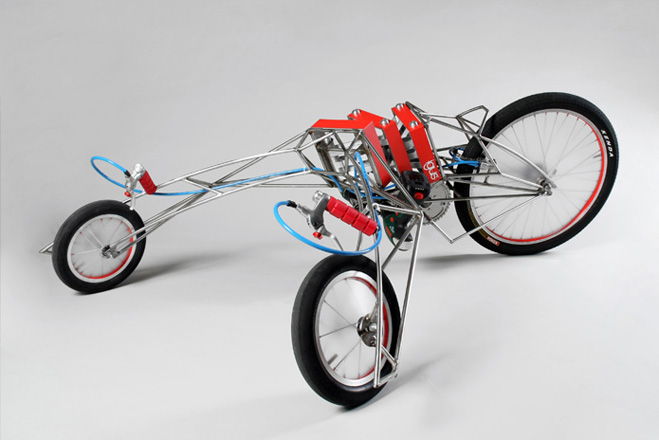 Remember the Streetflyer, a bicycle of sorts that let you ride it while in a gliding pose?  Here’s something similar that’s just as unnecessary yet awesome: the EX Trike.

Named for the word “eccentricity,” it is the brainchild of Nils Ferber, Sebastian Auray, Ruben Faber and Ludolf von Oldershausen.  And eccentric it certainly is, ridden in a prone position with your knees barely inches and your face less than two feet off the ground.  Oh yeah, and with your arms carrying a whole lot of your body’s weight. 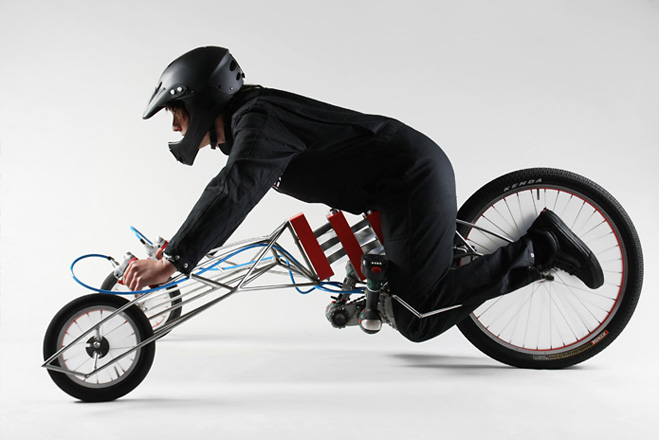 The EX Trike is a three-wheeled (two small in front and one large on the rear) vehicle that its creators describe as “screwdriver-powered.”  By that, they mean they used a pair of Bosch electric drills as the motors spinning the rear wheels, which propel it at speeds of up to 18.6 mph.  There’s no pedal system involved, so riders have to make sure they stock up on batteries lest be stuck on a weird trike that need to be pushed home.

Frame sports an open design, having been inspired by skeletons with their organs exposed (no, really).  Drive components were sourced from modified bike parts, while the unique steering joint was custom-milled using a CNC machine.

Is it uncomfortable-looking?  Yes.  Is it loads of fun?  More, like, loads of work.  Will you want to try it at least once?  Most likely.  The EX Trike isn’t for sale, but you can check out Nils’ site for  tons of photos, including some  of his earlier models that include LEGO prototypes.