Guy Shoots Anvil 200 Feet Up In The Air, Looks Pointless And Amazing At The Same Time 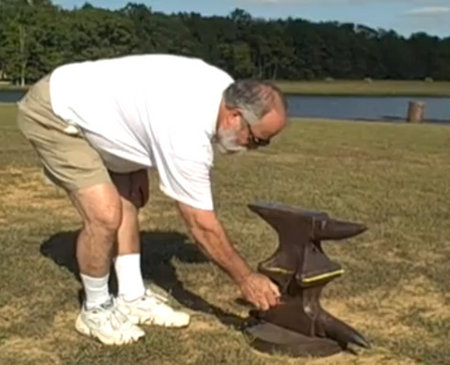 The man above is Gay Wilkinson, the self-proclaimed world champion of the very manly sport of Anvil Shooting.  Yes, anvils – those large slabs of dense metal they use for both blacksmithing and killing Wile E. Coyote in a variety of ways.

If you’ve never been to a mountain man festival or lived around some crazy blacksmiths during the Fourth of July celebrations, you’ve probably never even heard of this endeavor.  Shooting anvils?  What kind of cockamamie is that?

As it turns out, you can send those retardedly heavy anvils up in the air with enough gunpowder.  Stack two of them together, throw some gunpowder in between, add a short fuse, light it and run.  Then watch, from a slight distance, as the anvil takes a vertical flight.  In the case of Gay’s video below, 200 feet up in the air.

What’s the point?  It’s extra-heavy crap hurling through the skies after a loud blast.  How can that not be worth all the associated dangers?   According to Wilkinson, women ask him all the time why he does it.  Guys, on the other hand, just sit back and watch (in awe, I assume).

It is important to note that Gay appears to be a pro at this (he’s the world champion, after all).  The anvils he uses look like they’re modified specifically for blasting like a rocket, with a smaller frame (compared to those that blacksmiths regularly use), flat bottoms (so they can be stacked) and a milled area to pack all that gunpowder neatly in.

Check out the video below to watch the exhilarating results.