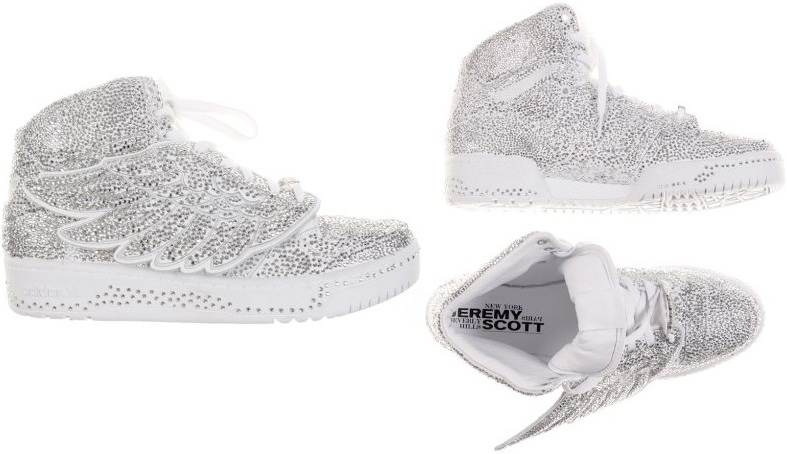 You’ve blinged everything else, from your car to your watch, so why not your shoes?   That’s exactly what Colette did with this limited edition Jeremy Scott Adidas Wing Crystal Sneakers, which could very well be the shiniest pair of basketball shoes ever produced.

Created as part of the French outfit’s White Crystal Christmas promotion, the already-offbeat leather kicks get even odder after receiving the full Swarovski treatment.  It’s as straightforward as it can get: they took a pair of JS Adidas Wings (which was first released in March of this year) and decked it in brilliant crystals.  Voila!

I’m not sure if these shoes are still legal in the basketball court (you’ll probably blind the whole opposing team, along with the entire crowd), but I doubt you’ll want to wear it to a game anyway.   Seriously, do five pairs of 13-inch feet stepping on your gorgeously-styled, blinged-out kicks really sound good to you?

The Swarovski x Adidas Jeremy Scott Wing Crystal is on exhibit at Colette’s from December 7th to January 2nd, alongside similarly unusual fare (such as crystal-decked skateboards, surfboards, bottle corks and more), as well as numerous pieces from the Swarovski Crystal Palace.  You can’t buy it off the shelf, but is available on request.   They’ll only do it in one size too (not sure what exactly), priced at a little under $3,700 a pair.