Lowbrow Legend COOP Is Back With A New Show 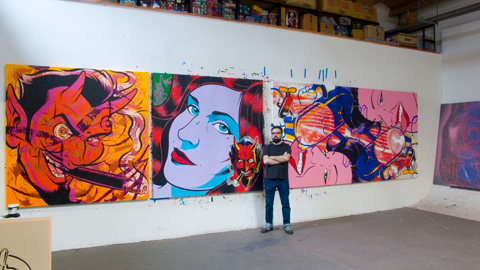 Lowbrow art fans rejoice!  Legendary artist COOP (aka Chris Cooper), who has done everything from concert posters for the Sex Pistols to promotional materials for Altoids, is back in the gallery scene after a three-year hiatus from displaying his.. uhhh… fine art.  In the words of the immortal Devil Girl, “It’s bad for you!”

The old and familiar cigar-smoking devil made its return last night, as COOP opened his latest show at the Corey Helford Gallery in Culver City.  As expected, we get the same beloved devilish vixens and sickle-toting, middle-finger-taunting skulls once again gracing the canvas, along with possibly the most iconic devil in pop culture today.

COOP refers to the new work as large-scale Pop Art, a progression of what he has increasingly turned his attention to since 2004.  Based on the photos, the new pieces are fairly big, each one incorporating a variety of textures and colors, more so than what the artist used to do in the past.  Combining stencils and silk-screens along with the painting, they look decidedly more abstract compared to the representational, comic book style older degenerates admirers are familiar with.

Fans in the Culver City area can catch COOP’s solo show from now through June 20th.  Those who aren’t can just wait for the photos to show up on the artist’s site (if they ever do) or ask for an online preview from the gallery (you’ll need to contact them).