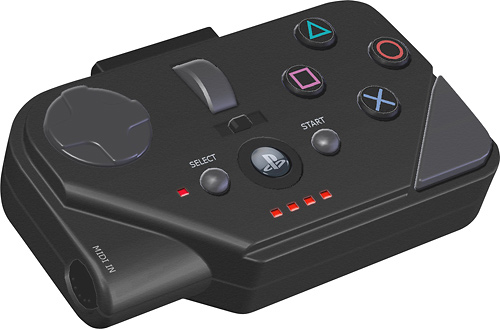 Ready to slay Rock Band 3’s Pro mode, but your wallet’s not ready to shell out for new gear?  If you have an old keytar or electronic drum kit gathering dust among your piles of dreams gone awry, you can turn them into your official gaming gear with the Mad Catz 3 MIDI Pro Adapter.

Available for all three current-gen consoles (Wii, PS3 and Xbox 360), the box lets you plug in a MIDI keyboard or drum set for use as your Rock Band 3 instruments.  All conversions from MIDI signals to in-game data are handled by the peripheral, so it’s just like playing with official accessories.

The Mad Catz MIDI Pro Adapter plugs directly to the console via a 9-inch USB cable, acting as the middleman for using real electronic instruments with your rhythm game.  Since your instruments will lack an official controller’s gaming buttons, the adapter supplies them, coming with a full D-pad and all the multi-colored mashing targets for your fingers.

A velocity sensitive adjustment is included for using MIDI drums, designed to reduce cross-talk during play.  For seamless play, the accessory comes with a detachable clip, so you can clamp it to your belt (or your nose, whichever suits you) for easy access.

Frustrated musicians can now rock their barely-used gear with the Mad Catz MIDI Pro Adapter, priced at $29.99 with free shipping.