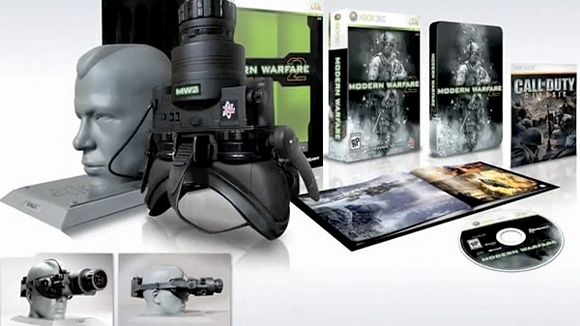 Special edition releases for games aren’t all that uncommon.  Modern Warfare 2’s upcoming Prestige Edition, however, sets itself apart with the bundle it offers.  Apart from the actual title, gamers will receive a book of artwork and character details, a collector’s-edition metallic casing and a fully-functional pair of night vision goggles (NVGs), complete with a creepy-looking sculpted head as a stand.

Now, that’s how you do a special edition – throw in a cool piece of tech you can’t just get at the corner store in tow.  The NVGs are especially awesome, since you can use them in case you really end up in an apocalyptic battlefield and will have to wage wars in the dark with the electrical infrastructure in serious disarray…against zombies trying to eat your brains…and deformed monsters.  Maybe, some modern-day soldiers too like in the game.

Little has been revealed about the night vision goggles, although you can clearly see just how cool they look from the photos alone.  They’re, of course, going to be MW2-branded and are supposed to feature alternating modes (likely shifting between night mode and regular wear, perhaps).  As long as I can use it in pitch black darkness, I’ll be happy.

The Prestige Edition isn’t likely to be available until November (at the earliest), but you can bet the shirt off your back that gamers are saving up for this version of the game as early as now.  Given that the Collector’s Edition, which contains everything in the Prestige without the NGVs, has been listed to cost $80, you can expect this to be priced in the low hundreds.  Hopefully.