The Skully Lets You Wear Your Face Like Ghost From Modern Warfare 2, Confuses Bank Employees 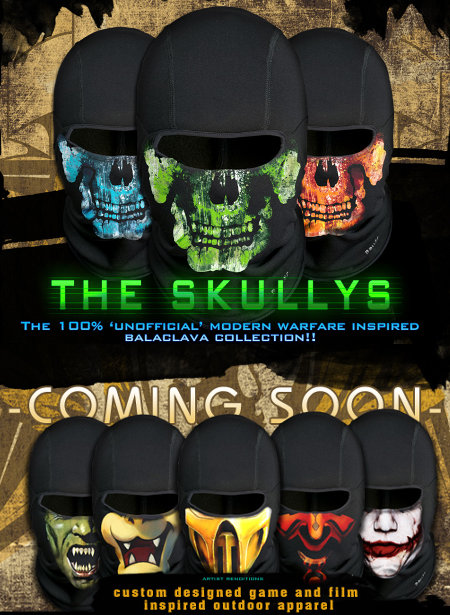 Want to look like Ghost out of Modern Warfare 2 the next time you’re out?  Leave the ski mask in the closet and put on The Skully, an unofficial recreation of the balaclava Sergeant Simon Riley wears in the popular game.

Even if you’re not about to raid your neighborhood financial institution’s safety vault, you should find a couple of entertaining uses for the skull-decorated military headgear.  If there’s a hole in your heart while pawning noobs at Xbox Live, for instance, you can put it on to add that extra feeling of realism to the whole experience.  Plus, it will help you play while feeling toasty through all this cold weather.

The Skully looks like a regular, military-issue balaclava, similar to the ones you put over your face while trading Airsoft bullets with your favorite cast of fake gun-toting friends.  It comes in red, green, blue and white, so you can rock a different one every time you stick up a new joint.

If a half-skull design isn’t exactly your favorite thing in the world, they’re also coming up with a number of other printed balaclavas, each one drawing inspiration from either a game or a movie character.  Since they’re doing it without the blessing of the studios that own the trademark, expect them to receive some form of legal notice soon.  Better buy what you like before they end up having to close shop.