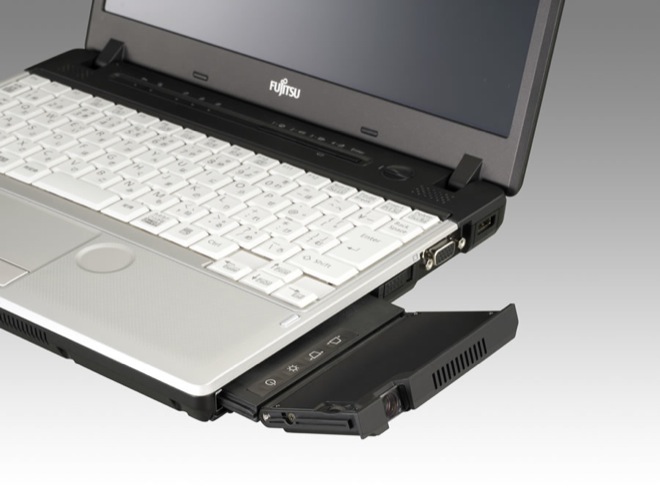 Optical drives on computers are barely useful these days.  So why not replace them with something that you’ll actually put through its paces?  For those who make frequent impromptu presentations, the Fujitsu Lifebook S761/C and P771/C might actually end up a better value, as they each pack a pico projector in place of the optical slot.

Personally, I’d have preferred a second battery unit to take that space instead.  Your mileage may vary, though, and a pico projector could be just the value-added feature that makes you pick these over other machines (beaming YouTube up a wall can be entertaining).

To use the projector, you simply pull at the unit from its bay, then adjust it up and down until you get the idea angle.   Aside from the maximum resolution, Fujitsu didn’t reveal much specs about the pico projector, although it shouldn’t be too far off from what’s currently available elsewhere.

Pricing for the Fujitsu Lifebook S761/C and P771/C start at $2,690, which is a pretty steep price for a regular-sounding computer with a sub-$500 add-on.  Then again, Fujitsu has never been among the cheaper hardware manufacturers out there, so I guess it’s no surprise.