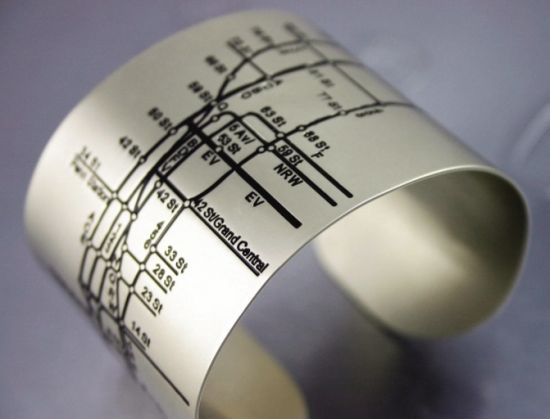 Lost in New York? Get a map of the subway route right on your arm with the NYC Metro Cuff, a stylish bracelet which shows an easy-to-read map of the city’s commuter lines so you don’t have to go in circles trying to find your way around the city.

Designed by Tiffany Burnette, the Metro Cuff lets you carry directions to the Metro Subway without having to look like a country bumpkin’ fresh off the farm rolling out a folded map in the middle of a crowd. Any time you’re in doubt, simply check your cuff to easily figure out where you should be boarding next.

The entire subway line, stations, train numbers and street names are all imprinted on the cuff’s matte metal surface, so you can navigate your way around the city without feeling like an absolute dolt. At the least, it saves you from having to bring an actual map (which you’ll probably end up losing along the way) or a GPS navigator (which really is an overkill when you’re just hoping to find your way around the train system).

Fashion and function is definitely the sleek way to travel and, for New York visitors, it doesn’t get any better than an NYC Metro Cuff. If you need to make your way around New York City’s web of streets and routes, there’s no reason not to get one. It’s available from Design Hype for only $23.