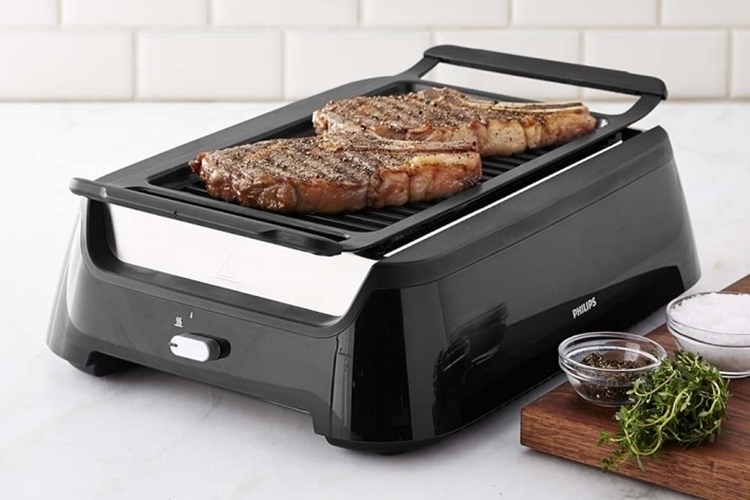 Indoor electric grills allowed us to cook steaks, kebabs, and other backyard staples in the comfort our kitchens, changing the accessibility of grilling forever. Only problem is, electric grilling still produced a good amount of smoke, making the kitchen look like a veritable warzone every time you prepared a big batch of steaks. The Philips Smokeless Infrared Grill changes that.

Using infrared heating technology, the grill is able to create a constant cooking temperature of 446 degrees Fahrenheit by guiding the heat towards the grid, all while keeping it away from the grease tray to keep the area cool. The result is a grill that produces up to 97 percent less smoke (80 percent when you’re grilling meat) than conventional electric grills. That means, you can do the grilling anywhere in the house, even rooms with no ventilation, without having to put up with suffocating smoke. 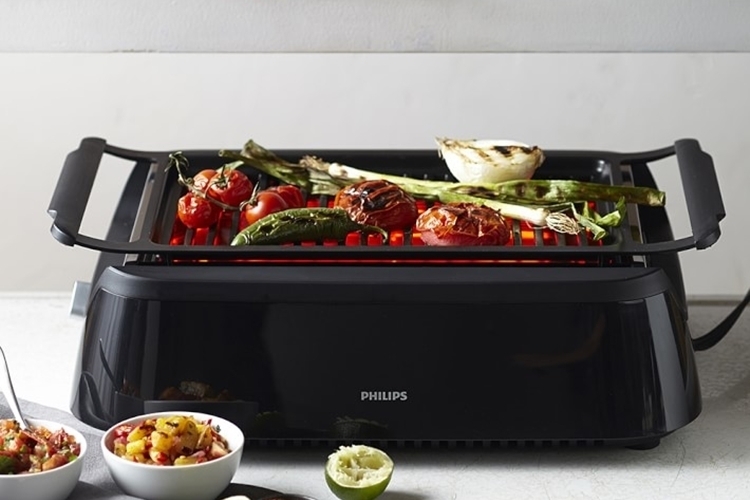 The Philips Smokeless Infrared Grill uses a non-stick grid as the main cooking surface, so everything you cook comes with authentic-looking BBQ grill marks. It comes with two swappable grids: one for grilling delicate food (fish and veggies) and another for grilling meats. The former requires no pre-heating time, while the latter can be pre-heated to desired temperatures in as little as six minutes. Since it heats at just a single constant temperature, there’s no need to mess with any settings, either – just lay down food, wait out the requisite cooking time, turn over, and wait again.

This infrared grill is a great choice for quick-and-easy burgers, chicken, vegetables, shish kabobs of all varieties, and fish. But what about steak? Steak purists might scoff at the idea of an indoor-friendly cooking solution—visually, it doesn’t carry quite the same “oomph” or masculinity of a big outdoor grill—but once they try this infrared grill they might prefer it (albeit secretly). The reason for this is because of the remarkably accurate temperature control possible with an infrared grill.

Conventional outdoor grills are great, but whether they’re fueled by charcoal or propane, they tend to have unavoidable temperature fluctuations. The Philips smokeless infrared grill heats up to the temperature that you tell it to reach and stays there, without any dips or spikes in degree. This consistency of temperature allows for steaks (and basically everything else) to be cooked with extreme precision. For example, if you want to get the perfect sear on your cut, tell the infrared grill to heat to 446 degrees Fahrenheit. It’ll heat quickly and perfectly maintain the temperature—get a little cooking timer to set next to the unit and you’ll have some of the most evenly cooked steak you’ve ever eaten.  Don’t worry—nobody will know you didn’t prepare it on a “real” grill.

Just how smokeless is smokeless? When you’re cooking meats, the amount of smoke generated has a lot to do with the amount of fat on the cut. For example, a lean New York strip won’t generate as much smoke as, say, a pork chop. So particularly when you’re cooking fattier meats, the Philips smokeless infrared grill isn’t truly, one-hundred-percent, never going to put off any smoke—but the amounts that are cast off from the device, even with smoke-prone ingredients, are nominal. Place it underneath the vent in your kitchen as you would when cooking just about anything else and you’ll be fine. What we’re saying here is that you won’t be setting off your smoke detector.

Cleanup is a really simple process. There’s two parts: the grill itself, and the drip tray below, and both are dishwasher friendly. As for the unit itself, it’s been designed to reduce splattering and the components are easily accessible to be wiped down. All surfaces are non-stick, so for anyone who likes a really clean kitchen, this is one accessory that won’t add more than a minute or two to your normal cleanup routine.

As a final note, anyone following an Atkins-style, low-carb diet that requires the consumption of large amounts of protein should absolutely own this infrared grill. Half of the battle for effective dieting is ease of preparation concerning meals, and this grill will help you make fewer excuses concerning your meals. Even if you own a traditional outdoor grill, do you really have the time to be cooking half of your meals on it? With the Philips smokeless infrared grill, you’ll save tons of time and be able to make the kinds of meals you should be eating. Place your meat on it, toss on a few vegetables, and presto—a healthy, really delicious, protein rich meal can be prepared quickly. 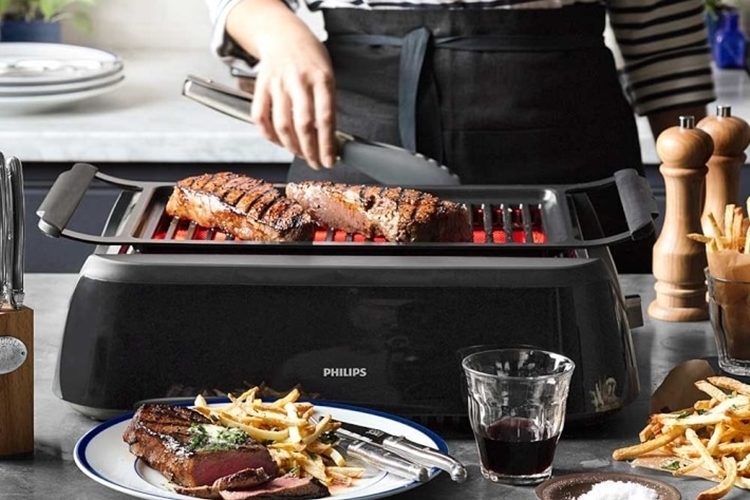 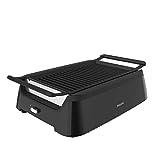