Power A Pro Elite: An Xbox 360 Controller For The PS3 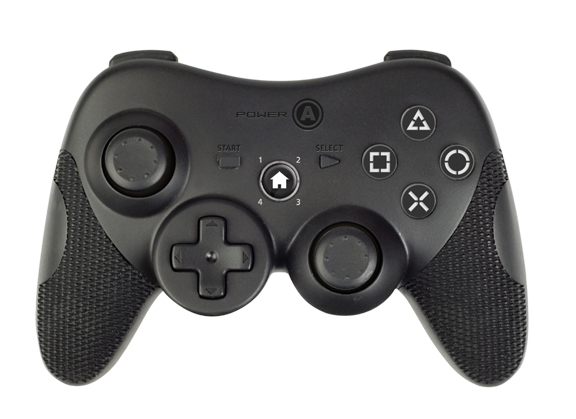 Like it or not, most people I know do prefer the Xbox 360 controller to the PS3.  Accessory maker Power A goes so far as to say it’s the “most natural traditional controller” for gaming.  That, in fact, is why they created the Power A Pro Elite Wireless, a PS3 controller clad in that OTHER console’s design.

They aren’t kidding about the “just like an Xbox 360 controller” part.   From the form factor to the button layout to the reverse analog configuration, they really did it up the same way Microsoft’s current-gen console  does its primary peripheral.

Inside, the Pro Elite functions much like any well-meaning PS3 controller, complete with Sixaxis motion-sensing technology.  Features include dual rumble motors, custom shoulder buttons and glowing action buttons, making for an even sweeter peripheral than your standard PS3 fare.  Taking the Xbox 360 controller’s design further, they extended the palm area much longer for even easier handling and added textured grips for a soft-touch feel.

Since it’s a third party controller, you’ll need to stick a dongle onto the PS3 to use it over wireless.  The dongle comes as part of the package, though, along with a charging cable, so there’s not even any extra purchase necessary.

The Power A Pro Elite Wireless Controller is  available for a fair-sounding price of $50.  Based on the reviews I’ve seen so far, it sounds like money well spent.  For those who’d rather do without the wireless and Sixaxis capabilities, but want the whole 360-style controls, they’re offering a wired version for only $20.

[Power A via Gizmodo]