Sportiiiis Adds A HUD To Any Pair Of Specs 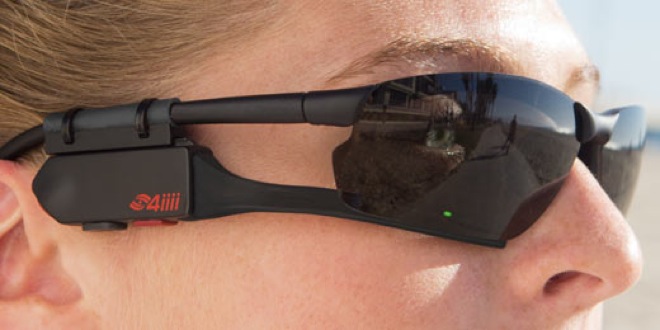 Eyewear with a built-in heads-up display (HUD) isn’t just for sci-fi movies anymore. And with the Sportiiiis Clip-On HUD, you can add one to any pair of specs you own.

Made by the equally strangely-named 4iiiis, it’s built for athletes and fitness buffs, giving them a way to monitor performance without having to check their gadgets or apps. Instead of complex readouts like most HUDs, the system uses a set of LEDs that can be programmed via a computer or smartphone app to communicate power, cadence and speed readings.

The Sportiiis is a clip-on HUD that clamps onto your eyewear’s temples and sets up a boom under the right eye. Seven colored LEDs sit on that panel, lighting up and flashing to indicate your current performance. It also hides an onboard speaker, which will read out the exact numbers when you tap on the unit.

It can pull readouts from performance monitors, including bike computers, pedometers and heart-rate straps, provided they’re compatible with ANT+ (which is like the Bluetooth for fitness gadgets). All LED actions will have to be pre-programmed, along with what gadgets you’ll use it with. Once it’s set, though, switching between a bike computer and a pedometer (and to any other gadget) can be accomplished with a simple double-tap.

Do you need one? Probably not. But you’re a lazy slob whose idea of a workout is to walk from McDonalds to KFC during lunch break. The fitness crowd seems to really love their gadgets, though, and we’ve no doubt the Sportiiiis will probably have a ready audience waiting for it. The device will hit stores November, priced at $200.