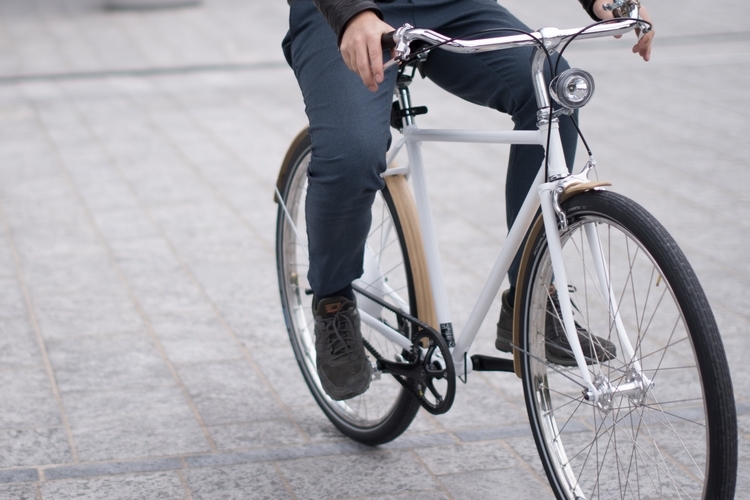 There’s no shortage of e-bikes out there, whether you need an electric bike for daily commutes, hauling cargo, or weekend adventures. They’ve become extremely popular for good reason with their ideal combination of size, range, and sustainability. Not only can an e-bike cover most city commutes, they do it while getting you to your destination faster than a regular bike, letting you get some exercise, and sparing you from having to pay premium for gas.  With this increasing popularity, they have also become more affordable.

Of course, the most affordable electric bicycle will still be the bike that you already own. You know… that thing you’ve got mounted somewhere in the garage that you take out once in a while. All you need is to add a motor and that becomes a full-fledged e-bike that can provide some pedal-assistance to propel you faster while easing the burden on your legs.

Yes, you can turn most regular bicycles into battery-powered motorized e-bikes. And these are the best conversion kits to let you do just that. 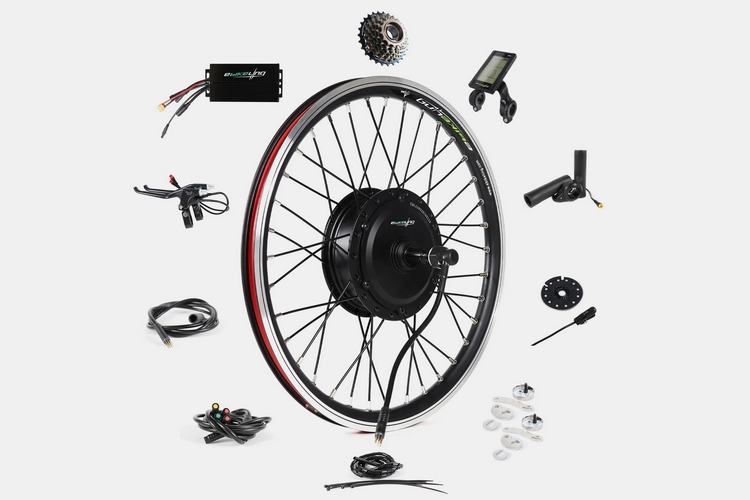 This outfit offers direct-drive conversion kits for both front and rear wheels, with options available for 20-, 26-, and 29-inch wheels, as well as 700C wheels. Users can choose from various motors, from 500W to 3000W, as well as your choice of 36V or 48V batteries and LCD displays. The entire kit is ready to install out of the box, although you will need tools and, of course, some actual know-how when it comes to breaking apart and putting together your bike’s rim. There’s also a fair amount of user-uploaded videos on YouTube with regard to putting their kits together. 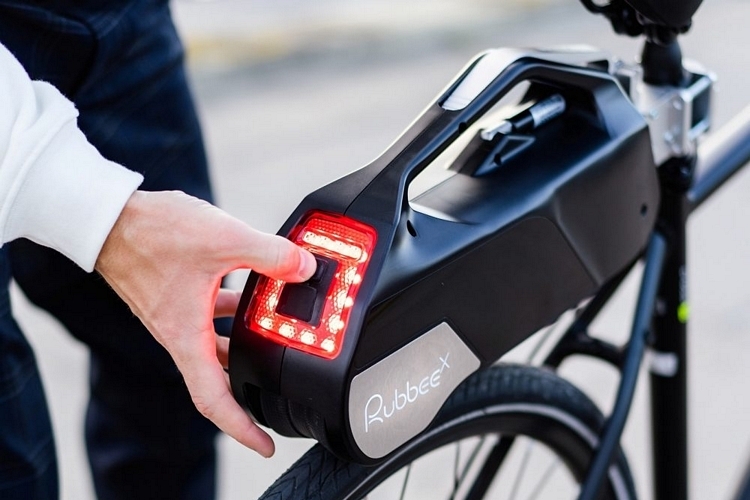 If the prospect of messing with axles and bottom brackets is turning you off to the idea of converting your bike into an electric ride, you may want to check out this option that does away with all that. Instead, this kit, which combines the motor and battery in a single enclosure, mounts to the seat post in such a way that the friction roller at the end is in direct contact with the rear tire. When the motor is activated, it gets the roller moving, which, in turn, pushes the rear wheel to start turning, as well. The set can be easily removed from the mount on the seat post, by the way, so you don’t have to worry about theft when leaving it in public spaces, while optional extra mounts allow you to easily swap the same motor between different bikes, saving you from having to buy multiple kits.

The built-in battery can keep the motor running for a range of up to 10 miles, although there’s room inside to accommodate an extra pair of batteries, effectively extending the range to a full 30 miles. With only one battery in tow, it can power the bike to speeds of up to 16 mph; with three onboard, it can go up to 20 mph. Sure, those performance numbers pale in comparison to what you can do with more integrated conversion kits, but the ease of installation and transferability make it a really worthwhile alternative. It works with all seat posts from 22 to 35mm in diameter and all tires from 0.5 to 2.5 inches in width. 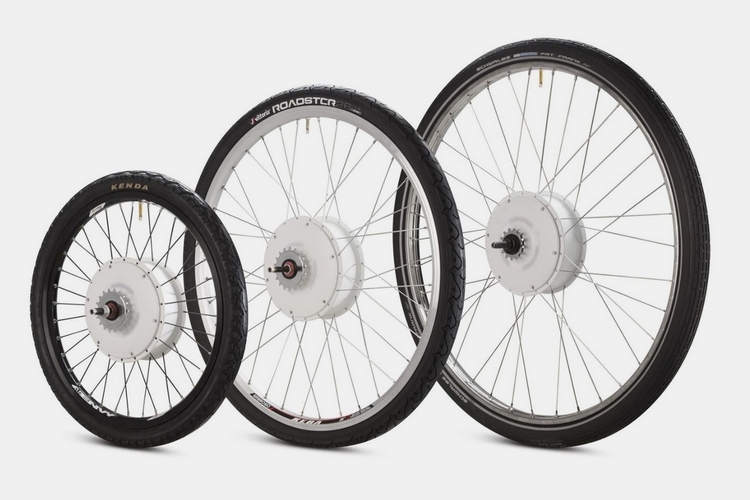 This conversion kit replaces your bike’s rear wheel with one fitted with a 250W hub motor and batteries, all mounted on a covered panel at the center of the rim. An onboard sensor detects as soon as the bike starts moving, which activates the motor to provide matching power. It can provide pedal assistance to speeds of up to 16 mph, all while allowing it to run for a range of up to 25 miles. A regenerative braking system, allows it to add power on the go, while a charging slot outside the enclosure lets you recharge it once you’re home. It has built-in Bluetooth, by the way, allowing you to pair it to an app for manual control of the pedal assist system. The kit is available in 20-, 26-, and 28-inch wheel sizes. 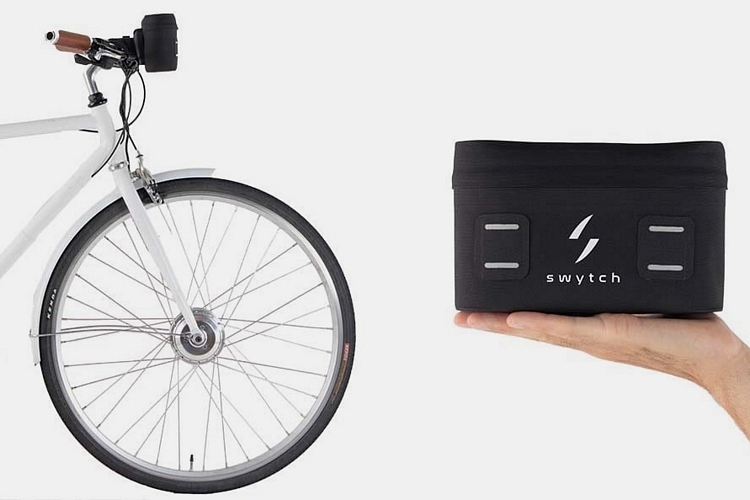 While it says “universal,” the solution isn’t actually a one-size-fits-all. Instead, you’ll have to specify the size of wheels you’re using (among other things, like if you’re using disc brakes), so they can send you one exactly like it. That’s because the kit replaces your entire front wheel with one that’s fitted with a built-in hub motor, which is wired to a battery pack that mounts on the front of the handlebars. Aside from the motor and battery, it also comes with a crank-mounted pedal sensor that detects your cadence and sends that information to the battery pack, allowing it to decide how much power to send to the motor. Basically, you get as much as you put in, so the harder you ride, the more power it will put up to match your effort, creating a pretty smooth pedal-assist system. The battery pack comes with a built-in front light, by the way, so you can use it to light the road ahead during nighttime rides. And yes, you’ll want to mount the battery pack right on that position, since it also has all the buttons that let you manually control the pedal-assist level, if you’d rather do that. The battery pack is removable, too, so you can take it off any time you’re parking the bike in public. 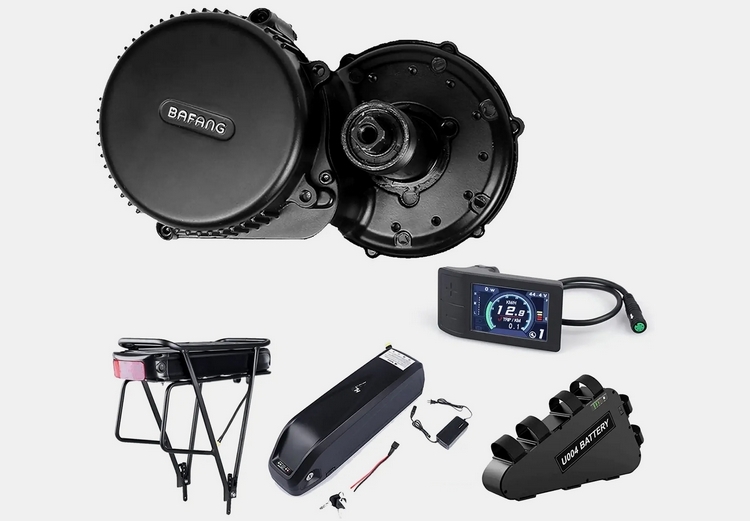 While hub motors are the most popular option for e-bikes, that’s not the only way to get things done. In fact, mid-motor drive systems are considered to be more efficient, as delivering power straight to the cranks allow it produce more torque, making it more capable of clearing climbs, bumps, and similarly challenging paths. It’s also a more universal solution, as the same setup can be fitted to bicycles with no regard for wheel size, hub widths, axle standards, and disk brakes. The system includes the motor and chainwheel system, as well as your choice of battery and display. The link below is for a 750W motor, although they also have listings for 500W and 1000W kits. 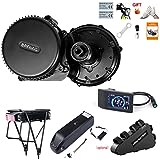