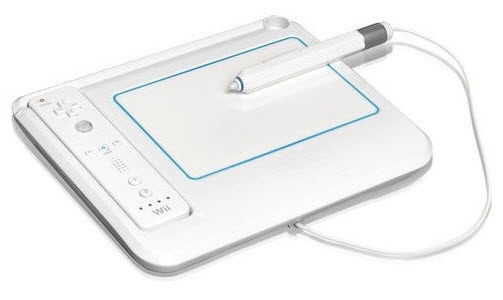 Tablet controls for the Wii make perfect sense.  Remember Mario Paint?  That thing, along with titles in a similar vein, could be a huge hit with the console’s younger demographic of users.  We’re guessing that’s what THQ had in mind when they decided to create the Udraw GameTablet, a Wacom-style tablet and pen controller for the Wii.

The peripheral consists of two components: a 9 x 7 inch handheld tablet and a stylus pen.  A dock on the left hand side of the tablet lets you insert a Wiimote, which provides the power and wireless  interface, so you can use it untethered.  Writing and scribbling can be done on a marked 4 x 6 inch area of the tablet, which should be big enough for most casual, game-related doodling.

THQ claims the pressure-sensitive pen offers finer control than a Wiimote. Wisely, they attached the stylus to the GameTablet with a cable, making it impossible to lose (well, unless you lose the whole slab).  It ships with one title, uDraw Studio, an art-based game. There are also two compatible game releases on the way, Dood’s Big Adventure (a draw-along platformer) and a version of Pictionary.

Of course, you can always just buy your kids one of those $200 Bamboo Fun tablets for the PC, which they should find more uses for.  However, something tells me that having this on the Wii makes it feel more like “playing,” while actually learning a more useful skill than button mashing and making strange bodily movements.

Aimed at 6 to 12 year olds, the uDraw GameTablet will retail this holiday season for $69.99.  Pictionary and Dood’s Big Adventure will be sold separately, priced at $29.99 each.