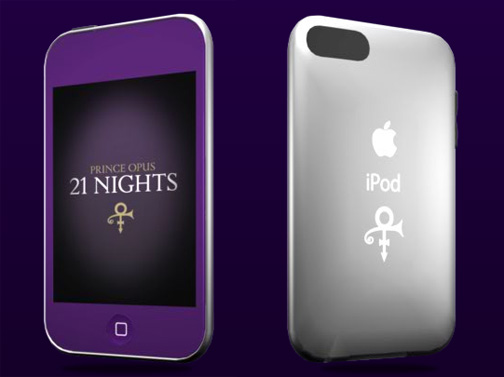 Even in this day and age, as it turns out, Prince still manages to command a following.  Want proof?  Check out the Prince Opus, a Prince-themed limited-edition iPod Touch that comes in a decidedly Purple Rain finish.

Selling for $2,100, you have to wonder what comes with the device.  Does it include Prince’s extensive body of work?  A number of unreleased studio tracks?  A strand of his chest hair that you can sell on eBay?  Sadly, it’s none of that.  Instead, all you get preloaded are a 40-minute concert video and 15 songs from a live soundtrack.  Hey, I love Prince and even have cassette tapes from the 80s to prove it, but this bundle is ridiculous!

The main reason for the high price, as it turns out, is an accompanying book of Prince photographs put out by Kraken Opus.  A high-priced British publisher, many books from Opus does reach well into the four figures, without a free gadget, at that.

Apart from the purple body and the TAFKAP symbol at the back, there is nothing to separate the Prince Opus from regular iPod Touch devices.  You can probably go to the mall and have someone add both those things to your own player at a way cheaper price.   If you’re an avid collector, though, you’ll be pleased to know that only 950 of the limited-edition Prince Opus bundles will go up for sale.