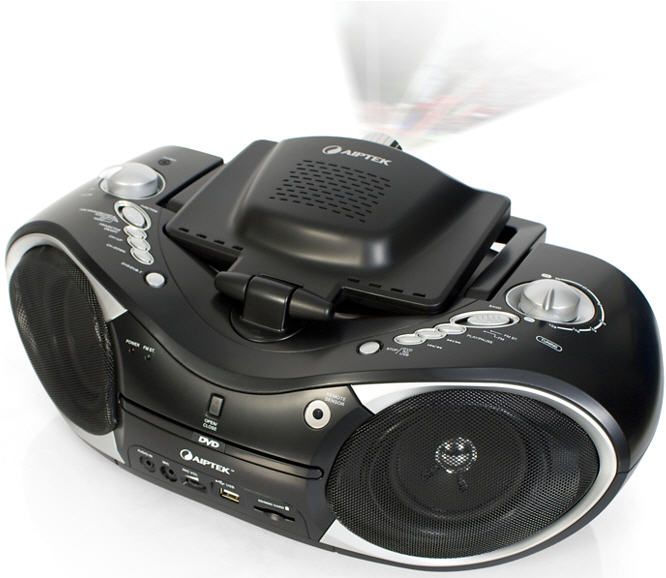 Can’t afford that expensive 72 inch LCD TV? Not a problem. Watch your favorite shows, clips and DVDs up on the wall with the Aiptek Boombox DVD Projector, a full-featured AV ensemble clad in an 80s-style boombox chassis.

Teens of the 80s who used to haul one around should be wetting their pants with envy. Not only do you get a loud boombox to pipe out snarky beats, you get a digital TV tuner, a DVD player and a mini-projector all built into the same frame. That’s a complete entertainment system that’s as easy to lug around as that dual-cassette deck Sony stereo you used to sit in the park with, playing Maria Vidal’s Body Rock over and over.

The Aiptek Boombox DVD Projector can throw images up to 75-inch (diagonal) video on walls, with VGA resolution and a 4:3 aspect ratio. The projection LED can swivel a full 180 degrees, allowing you to angle for an optimal viewing position. You can use it to watch DVDs, video clips, photo slideshows and TV shows, as well as listen to music and radio, all in 5.1-channel digital surround sound. It supports both USB and microSD, so you don’t have to burn any of that content to an optical media. Heck, you can plug in mics and other media players to use it as a speaker, as well as output to headphones or a composite cable too (yep, audio and video). Anyone say all-in-one? 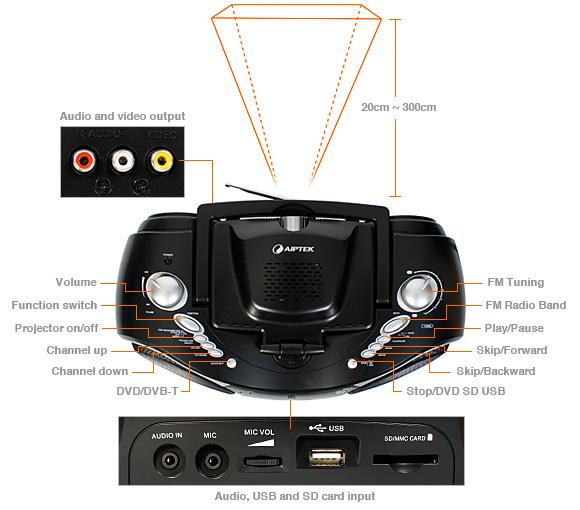 Next time your friends huddle together trying to watch a YouTube video on their iPhone’s screen, bring out this baby and show them what a portable entertainment system really means. You can get it for £329.99.