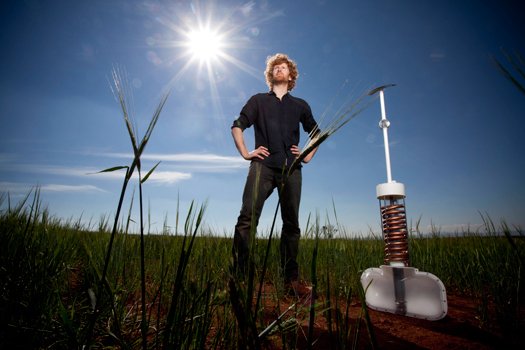 Any time you grow crops, irrigation is always a main issue.  Without water, plants die.  And when there’s drought, your farm is likely shit out of luck.  That’s what Airdrop aims to solve.

The winner of this year’s James Dyson Award, the irrigation system offers an alternative water source during times when your regular waterways run dry: it pulls moisture from the air using a turbine.  A network of underground pipes cool the moisture enough to let it condensate before being pumped through to the roots of crops via sub-surface drip irrigation hosing.

Created by Edward Linacre, the Airdrop mimics its function from the Namib beetle, which can live in unusually dry areas by taking moisture from the air that condenses on its back during the early morning hours.  Up to 11.5 milliliters of water can be harvested from every cubic meter of air, according to Linacre, which could be enough to help farmers keep crops alive during drier seasons.

The setup uses a self-sufficient system that draws on solar sources for battery life (when there’s a drought, there should be plenty of sun), eliminating electricity costs during use.  Battery use should be optimized, too, with the turbine running freely during high winds and switching to battery power only when the air is still.  It’s currently still a concept project, although the $14,000 prize money should go a long way towards realizing a working installation of the system.

You can learn more about the Airdrop, along with other entries from the James Dyson Awards 2011, at the official website.