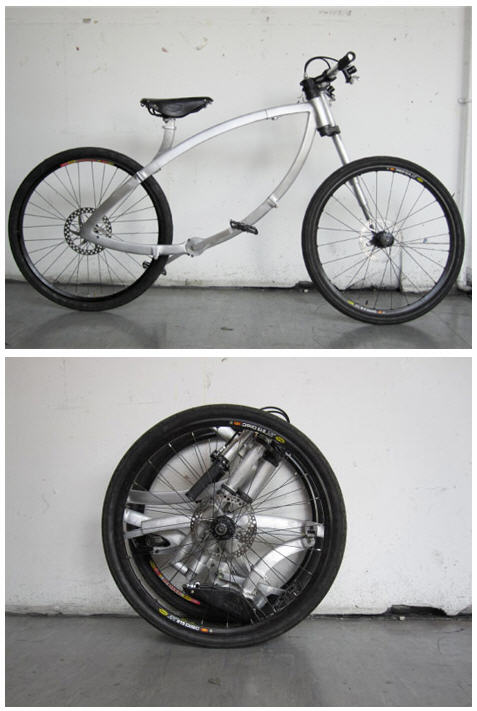 Folding bikes are all the rage now.  It’s not surprising, given the rise of both alternative modes of transport and small city dwellings.  While I’ve largely conceded that the Paratrooper Tactical Folding Bike is the sickest one you can get today, the Contortionist just might make me change my mind.

Created by designer Dominic Hargreaves, the new bike separates itself from the pack in more ways than one.  While it’s a full-sized bicycle (with large 26-inch wheels), the folded form is considerably smaller than other bikes we’ve seen.  Not to mention, it moves from one configuration to another like a breeze and can be pulled when folded (instead of carried, like most similar bikes in the market).  In fact, Hargreaves has said that he feels like he reinvented the folding bike – and I have to agree.

The Contortionist sports an unusual-looking aluminum frame, with an even more uncommon design.  The front and rear wheels are attached to alternating sides of the bike, each one to only a single arm.  While not unheard of, it’s an odd cue that helps simplify the folding mechanism.  Even more bizarre, however, is the lack of a bike chain.  According to Hargraves, the bike will employ an internal hydraulic system that uses pipes and oil to transfer power from the leg to the wheel.  Apparently, it’s a system that’s been around a while, but has rarely been employed.

Hargraves’ bike has been shortlisted for the James Dyson Award (and actually has a good shot of winning the whole thing).  The designer is also currently in talks with three German car manufacturers who are all interested in bringing the Contortionist to production.  It’s a pretty amazing bike, for sure.  Check out the video below to see it in action.