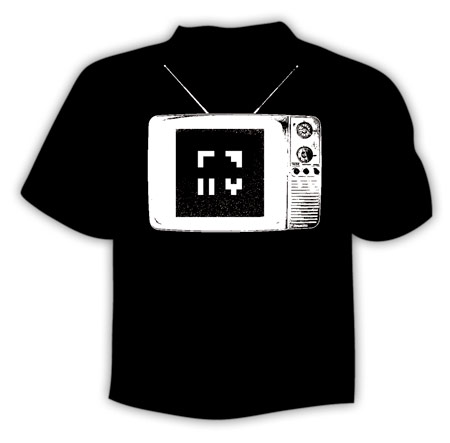 Can’t find a way to sell a shirt with an old TV graphic printed on it?  Do what these guys did: incorporate the design in a Flash-based augmented reality web app and give people a reason to buy.
Called AR-Tees, the shirt is a basic black tee with a TV graphic and a square box with graphic markers in the middle.  You won’t magically be in an AR universe every time you wear it, but when you’re parked in front of the computer with a webcam in tow, you can take part in a little pointless entertainment.

While wearing the shirt, launch your browser and visit the link to the creator’s Flash app.  Give Flash access to the webcam and watch the ensuing augmented reality scene, which captures you with the shirt on and a cartoon playing on the TV graphic printed on it.  The video follows the square area on your shirt, so even if you move, it will look like you’re wearing a TV on your torso.

Since the app merely finds the square marker on the webcam feed, you can bypass buying an AR-Tees shirt and just print an image of the graphic.  Put that up to the webcam and the Flash app will identify it as a valid marker, showing the AR-style video.

What’s the point?  Well, nothing really.  Just another mindless way to watch life pass you by (as if you didn’t have enough of those already).   You can get the AR-Tees from the creator’s website, priced at €27.90 (around $37).