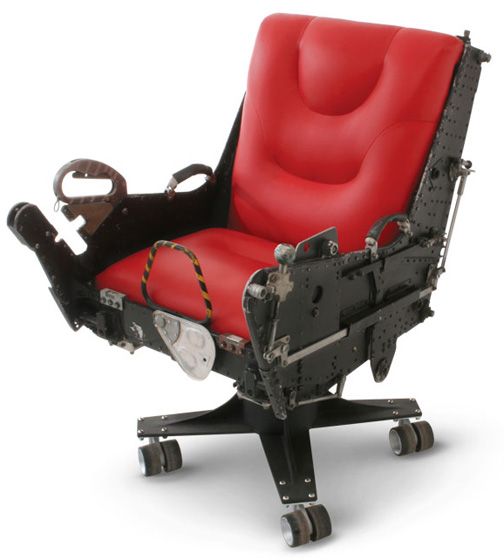 Want to type your excel sheets at work all while feeling like you’re sitting at the helm of a warplane? Beg your boss to get you the F-4 Ejection Seat from MotoArt, which turns an authentic pilot’s chair on Vietnam-era F4 fighter jets into wheel-toting office buckets.

Despite brandishing “Ejection Seat” on its name, the metal-clad office furnishing can’t actually lift off. In fact, judging from how heavy all that steel looks, I doubt you can even pick it up with your paltry little arms.

Lack of ability to fly off the ground notwithstanding, it’s probably one of the coolest office chairs money can buy. It sports a fabricated and powder-coated aluminum base, accurate-to-the-detail bucket seats (default red racing upholstery, but you can customize to your preference) and a lowrider profile (hopefully, they added a way to pull it up to make it useful). The frames are left in the original condition as they were retrieved from real F4 planes.

I’m not too familiar with the design of ejection seats, so don’t ask me anything about all those layers of steel piled up on the sides. It looks way awesome, though, doesn’t it? It comes with a flip-up stopper right at the crotch (for pain or pleasure, I’m not sure), which should make it impossible to slide off your chair when you fall asleep during office hours. See, it’s not only pretty, it’s useful too.

MotoArt doesn’t list a price, which means it’s probably on the expensive end of the spectrum. If you do decide to get one, though, make sure to purchase an accompanying helmet, seat-mounted parachute and straps in the event that you need to escape from a burning building without a Rescue Reel.  How cool would that be?