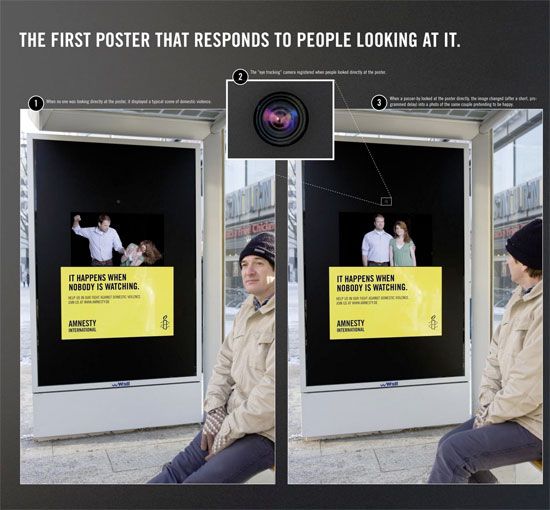 We’ve seen posters that alter their displays automatically before. So far, though, what we typically get around public places are advertisements that change their visuals at specified time intervals. This award-winning ad for Amnesty International takes the technology a step further, adjusting what it shows based on whether people are looking at it.

The public service ad, which makes a point of how domestic abuse happens when nobody’s looking, shows an image of a happy couple when it detects pairs of eyes fixed onto it. Once everyone looks away, the picture changes to that of a man physically hitting his wife, creating a very clever effect that pushes its message in a powerful way.

Erected at a bus stop in Hamburg, Germany, the interactive poster uses an eye-tracking camera that ascertains whether people are looking directly at the picture of the couple. Once it detects that, it waits for a few seconds of delay before replacing the violent image into a picture of a happy pair.

Of course, since it uses a single-camera setup, it can only detect onlookers directly in front of the poster, so looking at it from an angle isn’t likely to make it change. Still, this is a great demonstration of what simple interactive technology, coupled with creativity, can do for making advertising more vibrant and dynamic.

The poster, designed by advertising agency Jung von Matt, showed up as a single installation, largely as a way to demonstrate the technology (not to mention win some awards). Hopefully, we chance upon some more implementations like it soon.