Cargo Bike Abuse: A Bar, A Pizzeria And A Dance Club In One Pedal Pusher 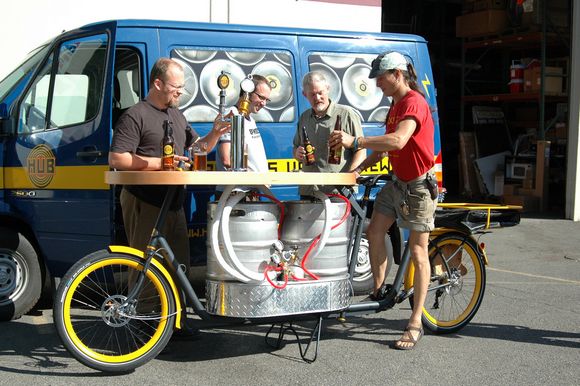 Always wanted to open your own bar, but never had the money to rent out a space?  Screw that.  Just build a mobile one in your van, stock it with drinks, add some music and you’re good to go.  Can’t afford a car either?  Do what these guys did – build one out of a bike.

Described as a “Pub Bike,” the pedal-pushed mobile party was fashioned by Portland bike builder Metrofiets for Hopworks Urban Brewery (HUB).  Combining a mobile bar, a pizzeria and a dance club aboard a cargo bicycle, it’s a strange machine that could actually work.  Heck, this thing can park down my building during lunch break and probably sell out one cup at a time before work resumes. 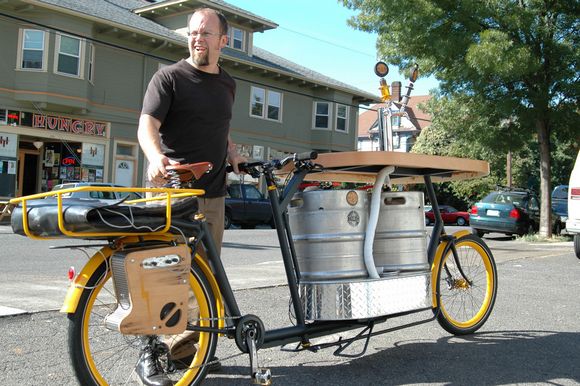 It sports a  long bike frame, with a large cargo area in front of the handlebars.  Two kegs full of the sweet stuff is propped on the cargo bin, along with 25 pounds of ice.  Sitting on top of the kegs is a rectangular table with two beer taps attached to a 50-foot cooling coil to ensure that the brew reaches your glass ice cold.  A large, square rack behind the rider is designed to hold stacks of pizza boxes, while music is provided by a wood-encased sound system right below it.

Designed to carry up to 400 lbs of pizza, beer, ice and human passengers, the bike features chunky tires with full fenders and a nine-gear system that allows it to ride reasonably fast without killing whoever’s pumping the pedal.  This is the first iteration of the design, put out just in time for the upcoming Biketoberfest celebrations in Portland.  A future version is in the planning stages, though, which will see the bike decked with a second speaker system and a solar array to power all the electrical equipment onboard.

I want something like this hawking beer in my neighborhood.  Seriously.