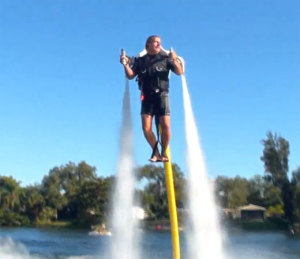 We hear a lot about solar powered gadgets and other devices, but we rarely hear about water powered devices.  However, there are a number of them out there.  As more and more companies move to being green, hydroelectricity is becoming more and more popular.  In addition to using dams on rivers to generate power, tidal power farms have sprung up.  These farms could actually become a major power source in the future.  However, there are some smaller hydroelectric gadgets that we can own and use in our daily lives.

Well, OK, maybe the JetLev-Flyer isn’t something we will use every day, but it’s incredibly cool!  It’s a water-powered jet pack just like we’ve seen in the movies!  Built by Hermann Ramke, it can actually send someone soaring about 50 feet into the air at around 30 miles per hour, and you can travel for almost 200 miles before refueling.  You can actually buy one of these awesome water-powered jet packs for only £160,000.

The JetLev-Flyer may be out of most people’s price range, but the water-powered clock by Bedol probably isn’t.  All you do is fill its tank with water and then squeeze in a bit of lemon juice.  The lemon juice makes the clock more efficient.  It keeps perfect time and will even store the time in memory when you change out the water. 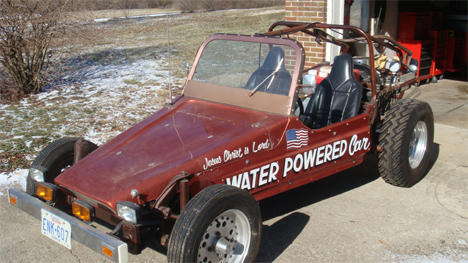 Our final interesting water-powered device is the NoPoPo batteries.  Created in Japan, the NoPoPo, or Non-Pollution Power batteries, run off almost any liquid.  They even work on urine!  However, they only work for around five charges, so you’re not going to replace all of your batteries with urine-powered cells just yet.  Still, it’s a very interesting idea.