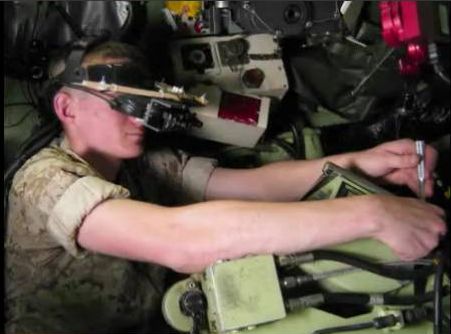 In the future, mechanics may not have to know how to fix anything.  While we’re not quite there yet, there is something impressive about rigs like these Augmented Reality Goggles from Columbia University, which has been shown to help mechanics perform maintenance on vehicles at twice the usual speed.

You probably know the augmented reality drill by now.  With a layer of tech between you and whatever  you are looking at, you get to see the world through a different set of eyes.  In this case, the head-worn AR gadget displays all the information and instructions needed to finish the job, removing the need to fiddle with a textbook or a laptop like mechanics usually do.

The team of researchers from Columbia University conducted tests with six Marine mechanics, who used the goggles to repair light armored vehicles.  Collectively, the results were very impressive, with the subjects posting up to 46 percent improvement in speed when using the technology.

Users wear the bulky goggles around their face, controlling it via an Android smartphone (the G1, which was probably the first smartphone to come with a compass, a camera and a GPS, all three of which the system uses) attached to their wrists.  The AR software assists the users in performing the repairs using 3D arrows that point to the specific components, along with text instructions, warnings, floating labels and animated models of the tools they need to use for each particular task.  Yep, it’s like “How To Fix Stuff For Dummies,” with a robotic master telling you what to do.

Did you get that last line?  A robotic master telling you what to do.  Welcome to the future.  It ain’t pretty for humans.  Check out the video over at Technology Review.