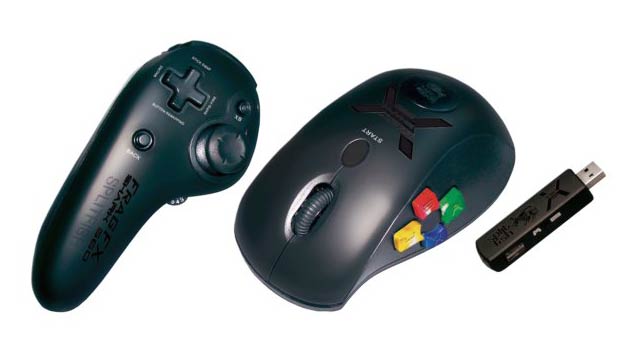 Remember the weird-looking PS3 controllers Splitfish released some time ago?  Well, Xbox 360 gamers can get in on the unusual console gaming action, too, with the FragFX Shark 360.

Designed for once hardcore PC gamers now migrating their wares to console platforms, it’s a mouse and nunchuck combo that should make your FPS gameplay feel just like they did on a computer.  You know, with a mouse controlling your player’s movement and stuff.  That way, you get to enjoy the same accuracy and precision you get from a PC without having to retool the skills you’ve worked so hard on all these lonely years.

The FragFX Shark 360 claims to provide “an almost perfect PC mouse-like FPS experience” for Xbox 360 gamers.  We don’t doubt it for a minute, given that they turned the right analog stick into an actual mouse, with support for button mapping and sensitivity adjustment on the fly.  Oh yeah, it’s functional as a computer mouse (works with PCs and Macs), too, complete with left button, right button and a scroll wheel.

The XYAB buttons of the standard controller are ported to the side of the mouse, while the d-pad, left analog and triggers are all on the mini-nunchuck part.  The controllers pair with the Xbox 360 wireless using a 2.4GHz USB dongle, with a single AA battery powering each for up to 50+ hours of gameplay.

Splitfish claims that the FragFX Shark 360 will work without any lag, making the console transition for PC gamers seamless.  It’s currently on preorder, priced at $89.99.