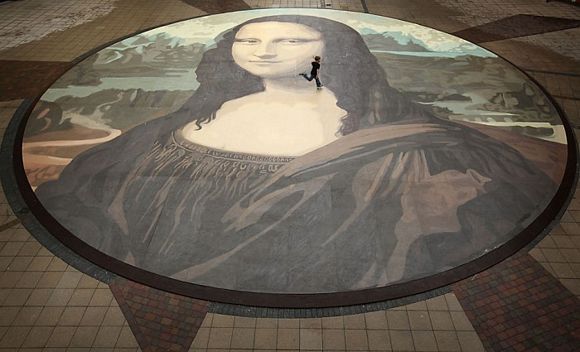 That, right there, is a photo of the world’s largest reproduction of Da Vinci’s Mona Lisa and you can totally step on its face.  Awesome.

On display at the Eagle’s Meadow shopping center in Wales, the collaborative artwork was put together by dozens of people from various community groups and the local Wrexham schools.  The project was spearheaded by artist Katy Webster, a recent fine arts graduate from the North Wales School of Art and Design at Wrexham’s Glyndwr University.

Rather than a single piece mural, the reproduction portrait used paint-by-numbers tiles atop a low but specially-made platform.  A total of 82 vinyl slabs make up the 240 square meter creation, which is about 50 times larger than the original Mona Lisa.  It’s very impressive, especially considering how difficult it is to plan a collaborative piece.

We’re not sure whether folks are really allowed to step on it.  Since the photo above has some dude running across the piece, we assume that’s about right.  Makes me want to head to Wales just to pose.  And maybe paint a moustache hair or two.  That sounds fun.  Given that it’s open to the public, I wonder how long before somebody tries to add their “mark” to it.