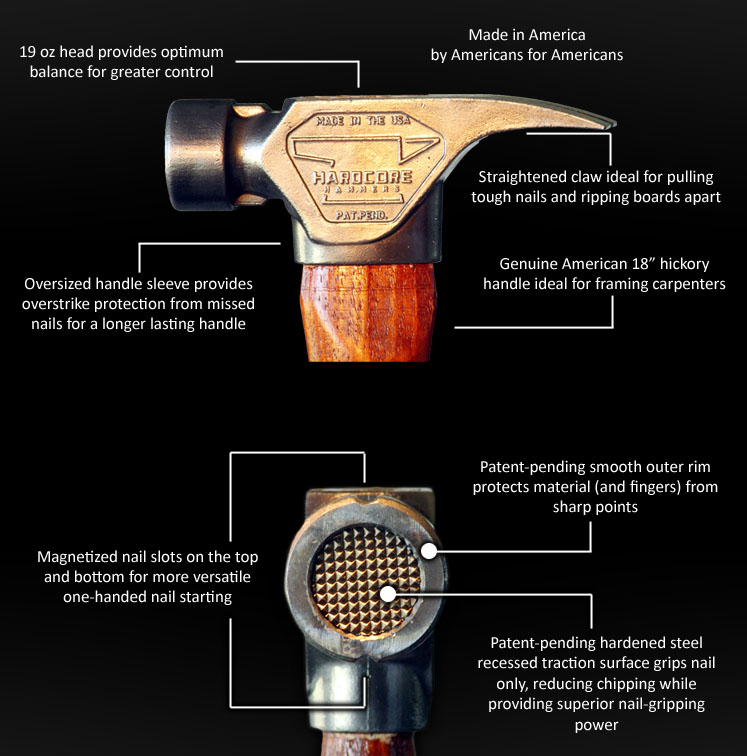 You may already have a hammer or two sitting on the toolbox in the garage.  The Hardcore Hammer, however, makes a strong case for being a more prolific replacement.

Designed to hold up through daily use, the framing hammer solves the age-old problem of waffled heads smoothing out within a relatively short time.  How?  By adding a hardened steel disc around the rim to ensure that no part of the grooved surface touches anything other than the nails.  As a result, the recessed traction is preserved for longer service (according to the company, it might even outlive other parts of the hammer).

The Hardcore Hammer features a milled 19-oz. core that is forged from the same steel material as jackhammer bits and an 18-inch hickory handle designed for framing carpenters.  Aside from the smoothened outer rim, it’s got two magnetized nail slots on the top and bottom of the driving face, a straightened claw on the opposite end and an oversized handle sleeve for added protection when you miss a nail.

According to its makers, the raised steel rim are also easier on the fingers when you make a mistake, since you don’t come into contact with any of the waffle edges.  More importantly, it removes the need for a smoothed face hammer when finishing work, since you can just use the smooth disc to fully drive nails in.

Considering your regular variety framing hammer starts losing traction after 3 months of daily use (titanium hammers may last just a little bit longer), the Hardcore Hammer should save you plenty of repeat purchases over time.  It’s cheaper than almost every titanium hammer I’ve seen, too, priced at $58.99.