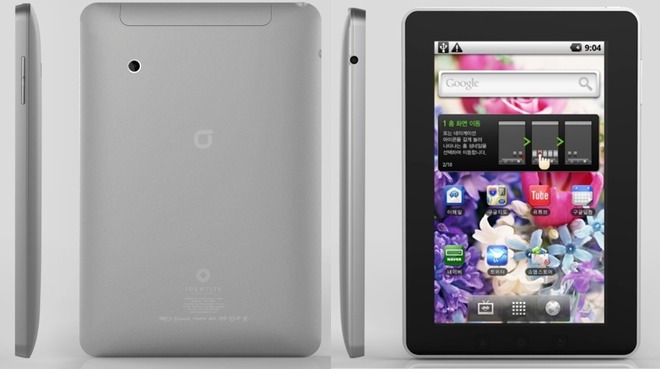 Korea will enter the tablet market in a big way, as soon as LG, Samsung and the rest of those cats begins pumping out their slates like they’ve been doing with cellphones.  For now, though, you’ll have to settle for the Identity TAB, an interesting-looking tablet that comes in at a sweet-sounding price.

The first Android tablet to come out of the tech-heavy nation, the slate runs Android 2.2 Froyo and packs enough hardware to stand its own against debuting competition.  What’s amazing is it costs just 300,000 Won (around $250), making it a huge bargain, compared to the $400 and higher price tag thrown around for most upcoming machines (including the $550 Dell Streak).  We’re guessing Samsung will follow suit when they announce their first tablet (whose leaked photos look eerily similar to this one).

Details of the Identity TAB include a 7-inch touchscreen LCD, a 1GHz Snapdragon processor, light and gyro sensors, 8GB of onboard storage, a rear-facing 3.2-megapixel camera module, WiFi, SD card expansion and a DMB TV tuner.  Expect the usual Google suite of apps and an e-book reader, along with the default Android UI experience.

While there isn’t much here to excite, the $250 price tag will probably set a precedent, especially among Android tablets coming out of South Korea.  That makes for a huge markdown compared to the base-level iPad and could really send people down Android’s way – at least, for this particular category of devices.

The Identity TAB is now available in South Korea.  Aside from the $250 direct purchase  option, users can also get it free with a two-year data plan from Korea Telecoms.