Remember Pokemon Go? Yeah, it’s like a lifetime ago. Unless, of course, you’re still playing it to this day, in which case, more power. You do you. Anyway, why spend your days catching Pokemons when you can spend that same time catching dinosaurs instead? That’s exactly what you can do with Jurassic World Alive.

Launched through a partnership between Universal and mobile gaming studio Ludia, the game is, basically, Pokemon Go with dinosaurs. As in, it will use your phone’s GPS, Wi-Fi, and wireless signal to determine your exact location, then populate your vicinity with all sorts of dinosaurs. You can then see the prehistoric creatures through the phone screen via augmented reality (AR). 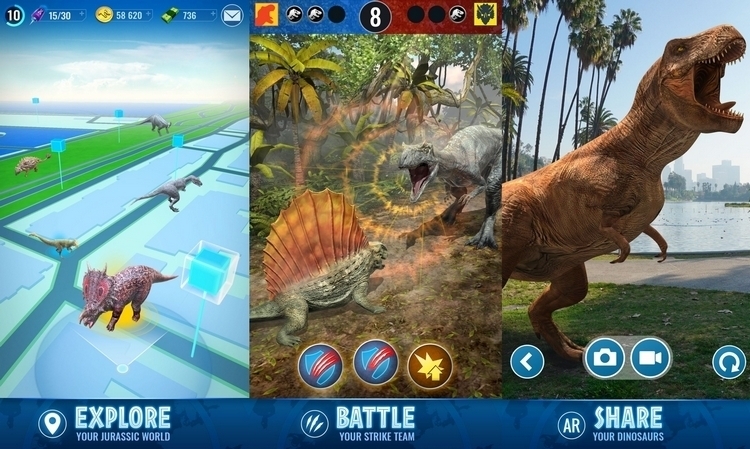 In Jurassic World Alive, you play as a member of the Dinosaur Protection Group, whose aim is to find and protect dinosaurs from pending extinction. Like other location-based AR games, it uses a map of your actual vicinity to plant various dinosaur species, which you can then find by leaving your house and exploring outside. Dinosaur locations won’t be marked on the map, so you’ll have to physically go outside and raise your phone in order to locate any prehistoric creature. On the plus side, the augmented map comes with a long range, so you can see creatures from a far distance, making it easier to figure out which direction to go next.

Once you see a dinosaur, your goal is to pilot a drone and fire darts at it. No, you’re not going to put it to sleep and pack it in a truck to take home. Instead, you’re firing darts in order to capture some of the creature’s DNA, since, you know, dinosaur cloning is an established science in the Jurassic World canon.  The more accurate your dart hits, the higher points you’ll get and you’ll need to reach a certain amount in order for the DNA collection to be successful. Once you have the DNA, you can then clone that dinosaur to add to your collection, so the creature can remain in its current location for someone else to find.

After collecting at least four dinosaurs in Jurassic World Alive, you can then create a team and battle them against other players’ teams. You know, like a dinosaur version of a gladiator contest. We’re guessing they made up some reason why the Dinosaur Protection Group will need to battle dinosaurs (gameplay is turn-based, by the way), since, you know, it kind of doesn’t make sense. Of course, most of us don’t really care – we just want our dinos to rip your dinos to shreds because it’s awesome.

You can use the AR interface, by the way, to have your dinosaurs appear with you, so you can take selfies with your prehistoric pets like you do with your dogs and cats. Yes, prepare to have your newsfeed invaded by an endless stream of friends taking selfies with their velociraptor, triceratops, and indominus rex.

Jurassic World Alive is now available for iOS and Android.