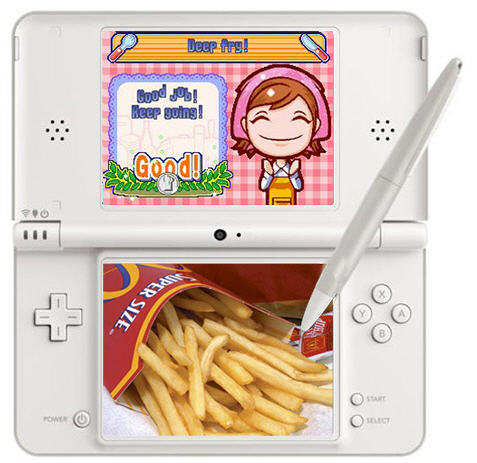 If the military can use games in preparing soldiers for battle, McDonalds should be able to use it for teaching in-house staff how to flip burgers too, right? That’s exactly what they’re going to do with eSmart, a Nintendo DS program designed to train part-time employees in McDonald’s Japanese stores.

Why eSmart? We don’t know. Far as I can tell, spending afternoons flipping burgers and cleaning toilets (hopefully not at the same time) rarely have anything to do with the word “smart,” even in Japan. But I digress.

The training software will apparently cost McDonald’s upwards of $2.2 million to develop and implement, which they’re hoping to recoup with the savings they’ll incur from never having to actually teach employees ever again (okay, maybe just a little). In fact, the fastfood giant is forecasting that the “game” will help cut employee training time in half, since a good part of the Japanese population (especially those looking for a career serving Big Macs) is, at the least, moderately familiar with Nintendo’s portable gaming console.

According to the Nikkei report, eSmart will begin deployment later in the year. Each McDonald’s store in Japan, currently numbering at least 3,700, will be equipped with two DS systems each, specifically for the purpose of employee training.

McDonald’s should definitely consider releasing this as a free download specially targeted at kids. You never know – there could be children out there whose sole dream is to dunk french fries in a vat of boiling hydrogenated vegetable oil. It might be the thing that makes flipping burgers a sexy occupation, the same way Army has succeeded in making being shipped to a warzone a sensible career choice. Aaah…impressionable minds.