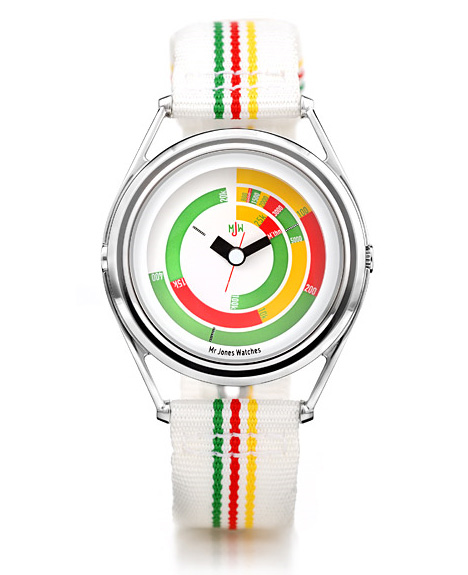 Called the On Foot Watch, the piece sports three arcs on the dial, which details world record times (down to the hours, minutes and seconds) for various running events.  It’s supposed to provide the novelty of being able to tell the best time for a particular distance with one glance at your wrist, for however that information might serve you (my bet is none).

After fifteen minutes of reading the description (several times over) at the Mr. Jones’ Watches site,  I’m convinced that I’m too stupid to figure out how the whole thing works.  The outermost arc is supposed to show distances with world records of under 60 seconds (100 to 400 meters), with the end of each length of color representing the actual time and that’s as far as I can get.  Inner arcs are supposed to show the time for farther distances (from 800 meters to 100 kilometers), using the alignment of the minute and hour hands, but I’ll be surprised if whoever wrote that copy actually knew what they were describing as well. 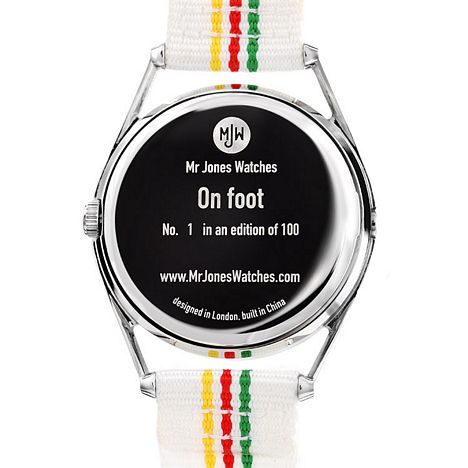 The case is made from stainless steel, with the face measuring 46 x 37 mm (height x width).  It uses a single jewel quartz watch mechanism, with a woven nylon strap.  Regardless of whether I can figure out what it does, the On Foot Watch looks damn hot for casual wear.  Heck, you’ll probably have difficulty even telling the exact time, but no one cares.  You’ll look good rocking it.