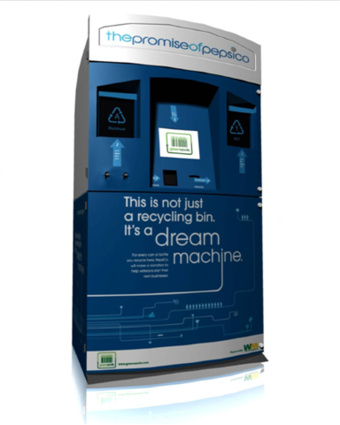 Pepsi is putting out new kiosks. Instead of dispensing soda like regular vending machines, though, the Pepsi Dream Machine is meant to collect bottles and cans for on-the-go recycling.

Done in partnership with Waste Management, the computerized bin is designed to make for a convenient place to dump used soda containers, providing on-the-go recycling facilities to regular consumers. Each can or bottle you drop in is recorded, with redeemable reward points (probably for more Pepsi) doled out for your troubles.

The Pepsi Dream Machine is a huge, blue-and-white box, with a computerized system that scans each container (so you don’t go dropping molotov cocktails inside) before opening the trap door. It’s connected to the internet, presumably for recording the deposits, as well as streaming media to the onboard displays (we’re guessing here, but if there’s a screen, there are usually advertisements with it).

They’re hoping to install it in supermarkets, stadiums and other public places where people are likely to be drinking soda out of bottles and cans. While definitely not an option for bulk recycling, it does offer a solution for those times you picked up a quick drink to quench your thirst. Of course, we have no idea how environmentally-sound hosting large, power-sucking machines are, compared to just installing recycling bins, but we’ll give them the benefit of the doubt.

According to Pepsico, the Pepsi Dream Machines will be operated by a company called Greenopolis, with the goal of increasing bottle return rates from 34% to 50% by 2018. They will also donate funds to the Entrepreneurship Bootcamp for Veterans with Disabilities for each returned container.