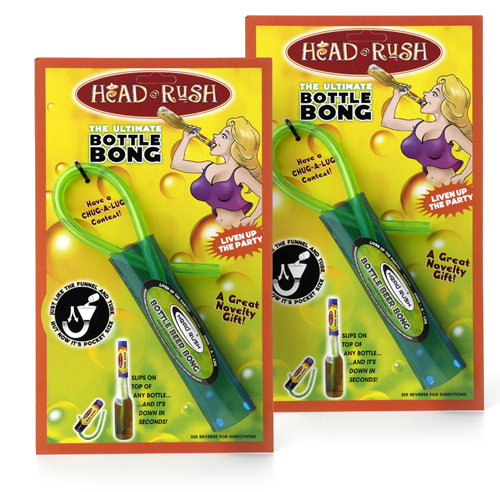 Beer bongs are fun.  Unless you’re willing to carry around a funnel and a hose, though, it’s a pleasure best enjoyed during house parties.  That is, until the Ultimate Bottle Bong came into the picture.

Intended as a portable beer bong, the drinking contraption lets you convert any regular beer bottle into a makeshift beer bong.  That way, you can turn post-work drinks down the corner bar into juvenile drinking  contests that end in a lot of puking with accompanying tears of joy.

The Ultimate Bottle Bong mimics funnel-and-hose ensembles using a cleverly-designed bottle cover and a small hose.   Simply slip the hose into the bottle, all while making sure the stretchable top part covers the mouth. Once that’s done, just turn the bottle upside down and begin chugging your favorite brew like it’s Friday night on campus all over again.

Sized to fit most common beverage bottles, it can be used for practically any drink you want, so you can throw up on soda or orange juice if that’s what floats your boat.  Since it goes in the bottle, though, you’ll have to remove and refit to use on a new one after you’re done, so it’s not as convenient as pouring five bottles in two minutes down a large funnel.   Still, it’s a beer bong – right in your pocket.

You can get an Ultimate Bottle Bong for inclusion in your bar-hopping gear for a measly $10.  if you ask me, this makes it a no-brainer for party-hardy beer fiends who miss the feeling of beer coming out of their nose every weekend.