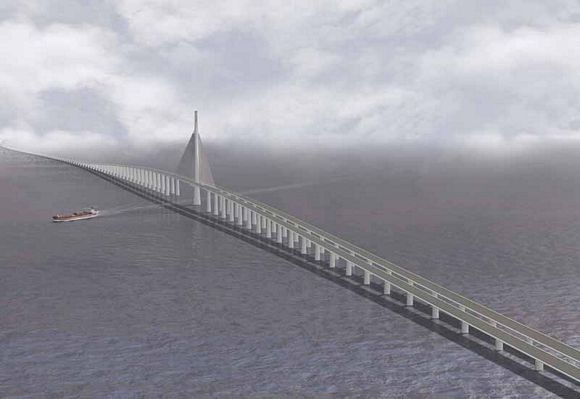 Bridges and monsters go so well together, especially in the movies.  After all, watching a finely-made raised road get crushed in the hands (or claws or tentacles, whichever the case may be) of a beastly creature always made for an excellent (and, sometimes, campy) action scene.  Expect a new spate of infrastracture-destroying monsters to haul their acts over to the Qatar-Bahrain Friendship Causeway, a planned bridge that’s set to be the largest in the world.

As the name implies, the new marine causeway will offer a connection between the west coast of Qatar and the east coast of Bahrain.  The pathway will be massive, stretching up to 40 km long (featuring a 22 km bridge and 18km of embankments) and measuring 13 meters wide.  According to those organizing the project, it will be the same length as 1,215 Blue Whales and 536 Boeing 747’s – it’s damn huge. 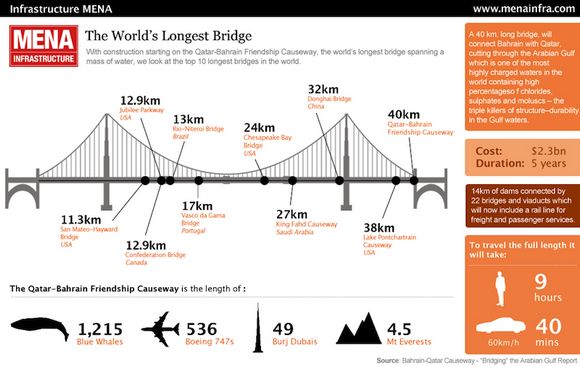 The Qatar-Bahrain Friendship Causeway will take an estimated 4.5 years to complete and a projected cost of between $2.3 and $3 billion.  Both countries have currently allocated $500 million to begin the project, with Houston-based engineering company KBR spearheading the construction.

According to estimates, the new causeway will reduce land travel time between the two countries to 30 minutes, down from the four and a half hours it currently is.  As many as 12,000 vehicles are expected to use the system daily (some pundits peg it at 20,000, though), all of which should make for an interesting disaster when a monster does attack the pathway.

So who’s gonna be the first to make their way to wreak havoc in the Middle East?  Godzilla?  Giant Octopus?  My money is on the Leprechaun – “I wants me oil!”