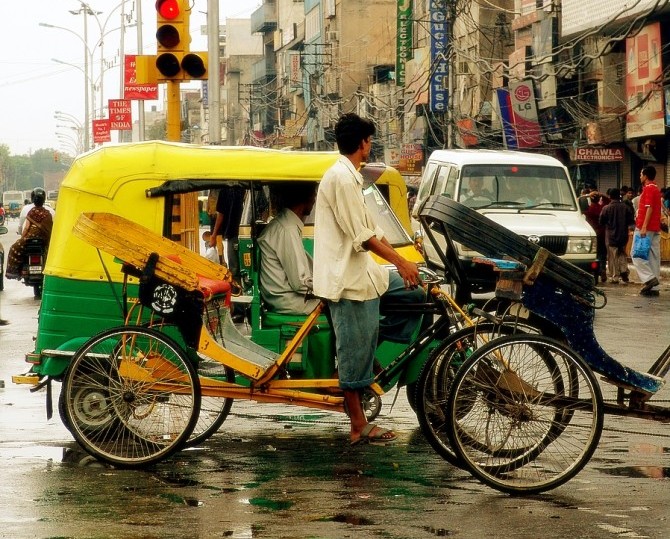 I’ve never been to India, but I can imagine the rigors of a rickshaw driver.  Ferrying customers and  their packages on nothing but brute strength – all day, everyday – is like a mild form of torture.  In fact, India’s Council of Scientific and Industrial Research (CSIR) director general Samir Brahmachari says the average rickshaw driver is often undernourished, getting back only 1,600 of the 4,000 calories they usually expend on an average day.

Remedying that plight is among their goals with the Solekshaw, which modifies existing rickshaws’ manual, pedal-pushing operation with some extra lifting by a solar-powered electric motor.  They’re looking to start with 1,000 of the hybrid pedicabs on the streets of Delhi, in time for the 2010 Commonwealth Games in October.

Each Soleckshaw will be outfitted with a battery panel and a small 36V electric motor that transmits movement through the vehicle’s chain drive.   With zero help from the driver, the motorized drivetrain can carry a 200kg load (approximately two passengers) at 9mph for an estimated 25 miles on a single charge.  Because of the limited battery capacities, drivers are expected to engage the rickshaw motors only when encountering difficult paths, such as inclined roads.

Instead of integrating a solar charging mechanism on the rickshaws themselves, replenishing stations will be set up around the city.  Drivers whose juice runs out can then trade in the exhausted cells for newly-charged ones.  When these “centers” are set up, it sounds like it could be an excellent facility for non-passenger hybrid bikes too – something we’d all love to see in more places around the world.