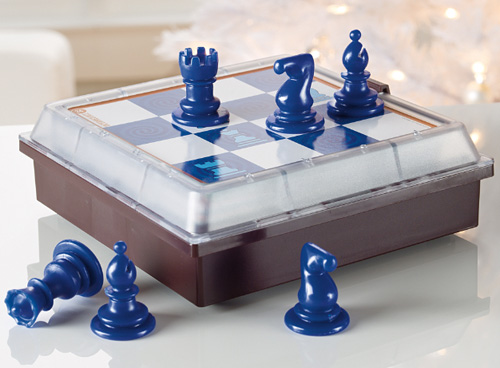 Playing chess on your own usually means logging on to a computer and firing up one of the million or so chess programs developed over the years.  But what do you do when you’re hankering for some chess action and you’re sick of looking at LED-backlit squares all day?  You pull out the Solitaire Chess.

Granted, it’s not your usual chess game.  Unless you have split personality or have a conjoined twin, it doesn’t make sense to play on an actual board with no one else around, after all.  Instead, you solve one of the included logic puzzles with the game using the rules of engagement in a more conventional chess match.

Solitaire Chess uses a 16-square game board and ten chess pieces to play a variety of challenges (60 in total) that ranges from beginner to expert.  Each challenge is printed on a separate card, so you can pick a puzzle randomly from the deck.  Using traditional chess moves, your goal is to eliminate each piece on the board except one, engaging your problem-solving and sequential logic skills throughout the process.

Included pieces consist of two knights, two rooks, two pawns, two bishops, a king and a queen.  The board comes printed on top of the holding container, where you can store both the pieces and the cards after use.

If you’ve been looking for a simple, fun board game to break the endless staring at rectangular screens that you do every day, Solitaire Chess sounds like a fresh way to keep your checkmating skills sharp even when you’re alone.  It’s available for $19.95.