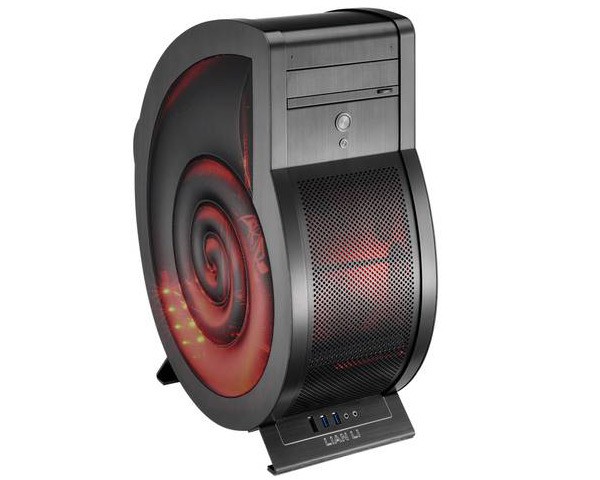 I know, I know.  The last time you bought a desktop PC case, Palm Pilots were still in vogue.  Believe it or not, some of your neighbors really still build desktop rigs and they do it in funky creations like this snail-shaped Lian Li PC-U6 Cowry.

Sure, it’s more novelty than necessity.  And gamers are likely to go for a spaceship-inspired chassis than a rig that looks like a shelled slug.  If you have a seashore-themed work area, though, there’s no reason why a snail desktop won’t make for a darling centerpiece, right?  Right?

The Lian Li PC-U6 Cowry is a mid-tower style PC case, clad in all-aluminum panels.  Inside, it can handle both micro-ATX and mini-ATX motherboards, a standard ATX PS/2 power supply, five HDD mounts (with anti-vibration thumb screws and rubber suspension) and four PCI slots that can mount graphic cards as long as 310 mm.

At the base of the front panel sits two USB 3.0 ports, one e-SATA port, and a full set of HD audio ports.  For cooling, it comes with two 120 mm fans in front to keep airflow in constant circulation, along with ventilation holes on the front and rear panels.  It includes two rubber-ringed holes for mounting a liquid cooling system, cable clamps for keeping things organized and a 530mm red LED kit that you can install for some extra bling.

Again, it’s hard to fathom gamers actually going for a snail-shaped computer.  Unless they’re intentionally building a slow computer.  Which would be awesome when housed in a snail chassis.   The Lian Li PC-U6 Cowry comes out later this month, priced at $349.