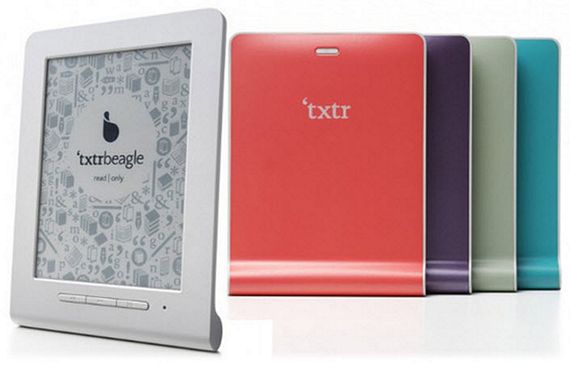 We always knew e-readers were getting cheaper, but we had no idea they were getting as cheap as the Beagle, which is expected to sell for under €10 (around $13).  Seriously.

At that price, it’s silly to have expectations other than a stripped-down, low-end affair and that’s exactly what German company Txtr brings with this device.  There’s no built-in lighting, no touchscreen, no WiFi, no cellular radio or any of those frills we’ve grown accustomed to in our e-readers, but it’s got an e-ink display where you can read books without straining your eyes the way you would with an LCD panel.

The Txtr Beagle is clad in a svelte 5mm frame that weighs a light 128 grams.  Display is a respectable 5-inch e-ink screen, with eight levels of grayscale and an 800 x 600 pixel resolution.  A bump at the bottom of the frame isn’t just some fancy design touch — it’s actually the battery slot, which takes two AAA batteries, rather than having a rechargeable unit built in.  Those two AAAs will be enough to power the unit for up to a year of normal use.

While there aren’t a lot of features, it can handle all ebook formats supported by smartphones, so you’ll be able to use it regardless of where you get your ebooks from.  There’s no WiFi, but you can transfer files to the 4GB onboard storage via Bluetooth.

At the price point, it’s almost certain everyone looking to pick up an e-reader will get a Txtr Beagle as a starter device.  Only problem is, you can’t.  Instead, Txtr is looking to sell these to carriers (they’re currently negotiating with Sprint and AT&T) as an add-on accessory for smartphones.