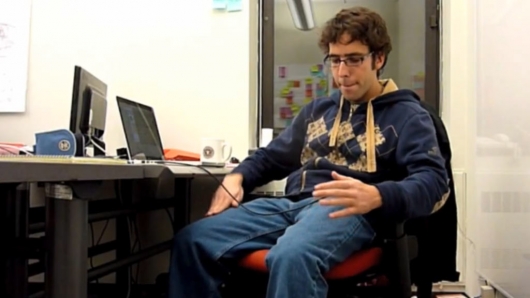 Drum machines are awesome, but having something to slap on-the-fly is just a more entertaining way of stringing beats together.  That’s why the Ubiquitous Drum Pants are so awesome – armed with just your modified pair of jeans, you can make a bevy of percussion sounds by slapping across your thighs.

Created by software designer (and, likely, occasional musician) Boris Smus, the DIY project is only in its first prototype stage, yet is already impressive.  Sure, the wires and electronics running inside the trousers are probably uncomfortable as hell, but it’s sure as hell better than hauling an entire trailer full of musical equipment.

At its current configuration, the prototype Ubiquitous Drum Pants comes with two square force sensitive resistors (FSRs) located right around the knees of each leg.  They’re hooked up by wires (stuck by electrical tape) to an Arduino board sitting inside the left front pocket, which is then connected to a Mac via the serial port.  Every time a pad is hit, information about the force of impact is sent to a Python program on the computer, which then synthesizes the taps into audible sounds.

Obviously, the current setup requires you to be literally wired to a laptop, which sucks for those who want to use it for actual performance.   Future versions will operate via Wi-Fi though (instead of the serial connection), allowing it to interface with software on more portable platforms (such as a smartphone).  An even more advanced version will use pads with built-in transmitters, allowing each one to be used independently, such as programming a pad on the right shoe to play the bass and another on the left shoe for the clap.

Smus put together an Instructable for the Ubiquitous Drum Pants, along with plenty of additional details over on his site.  You can also check out the video below to see it in action.