Wind-Powered Car Can Run Faster Than The Wind 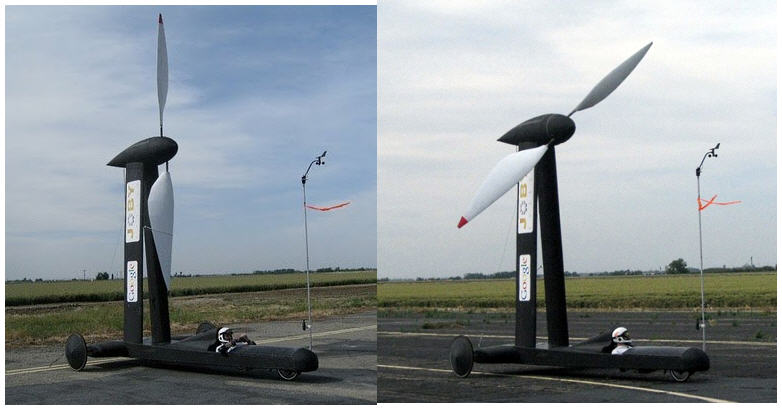 Can anything buoyed by the wind go faster than the wind? Some physicists say it should be impossible, but that’s exactly what Rick Cavallaro’s wind-powered car supposedly did last May 16th. It didn’t just go faster, it went extremely faster, posting a top speed that’s 2.86 times faster than the 13.5 mph winds at the time.

Using funding from Google and Joby Energy, Cavallaro and his team from the San Jose State University aerodynamics department built the wind-beating car over the course of a year. Detailed photos and schematics are available from their blog (link below), in case you’re interested in the vehicle’s construction.

The ultra-light, four-wheeled car uses foam as its primary material and mimics the aerodynamic principles applied in Formula 1 racers. A tall stand in the rear holds a 17-foot propeller, which Cavallaro says is the key to how the vehicle can travel downwind at such a high rate.

According to the builder, the propeller wheel actually turns the propeller, not the other way around. The propeller’s thrust then pushes the car, which also helps the propeller spin further, using the wind as an external power source (instead of being a mere perpetual motion device).

Granted, a lot of the physics and engineering here goes over my head so I’m not even going to try. Suffice to say, they claim to have been able to make a car that uses windpower to travel downwind while practically outrunning the wind, finally laying a real-world argument into one of the longest-running physics debates. So far, the team has made eight runs at the New Jerusalem Airport in Tracy, California. They’re now planning to get a land-sailing record to be certified by the North American Land Sailing Association.

[Faster Than The Wind via PopSci]