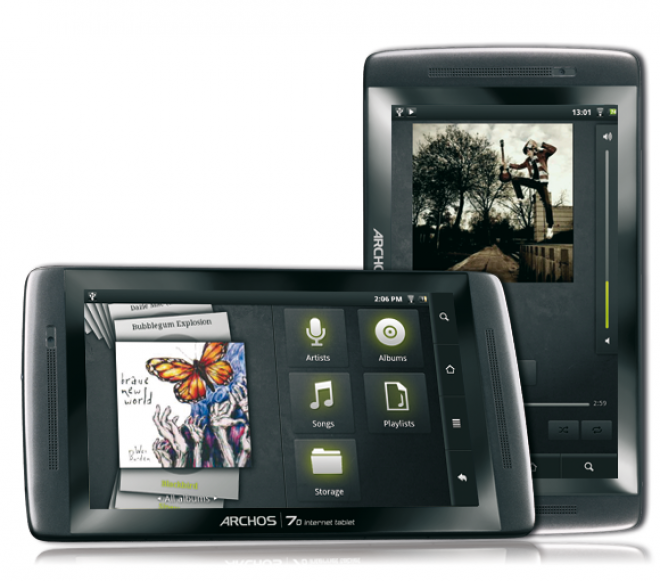 In all honesty, the tablet wars isn’t even heating up.  It’s just the iPad at the top and everyone else fighting for scraps.  Until someone beats Apple’s slate in price and rivals it in functionality, we doubt there will be much change in that.  The Archos 70 Internet Tablet gets at least one of those right, retailing for only $279.

The good news: the hardware on this thing sounds impressive for the price.  The bad news: it’s running Android 2.2, an OS that Google itself said is designed for phones rather than tablets.  Oh yeah, there’s no Android Market, either.

For almost half the cost of an iPad, the Archos 70’s specs sheet doesn’t sound so bad.  A 1GHz ARM Cortex A8 processor moves things along, aided by a 3D OpenGL ES 2.0 graphics accelerator.  There’s a 7-inch capacitive touchscreen (800 x 480 resolution), 8GB of flash storage, WiFi, Bluetooth 2.1, a microSD slot, a USB port, an HDMI out, a front-facing webcam and a battery rated at 7 hours of video playback.  It measures 7.91 x 4.49 x 0.43 inches and weighs 11 ounces.

Archos makes sure it offers plenty of support for audio and video, which hints at their aim at turning this thing into a slightly-oversized portable multimedia machine.  With the microSD and USB presence, you can probably sideload apps, too, although performance is likely hit or miss.  There seems to be a couple of useful pre-installed apps onboard, including Ebuddy, Fring and the Aldiko ebook reader, so it could be plenty useful right out of the box.