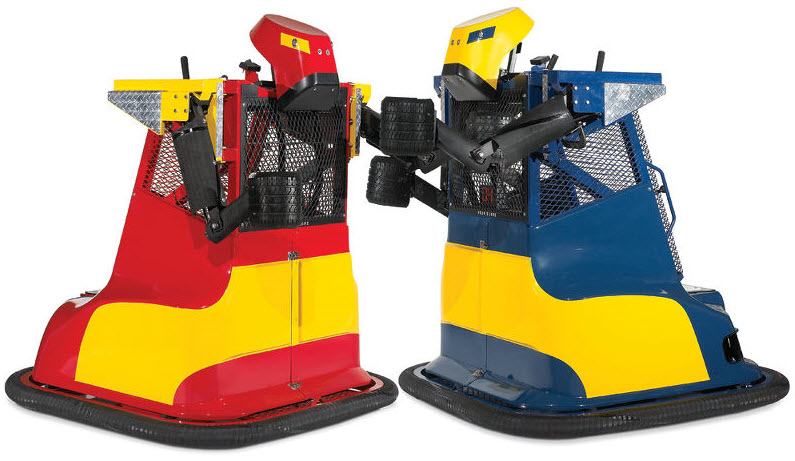 Did you just watch Real Steel and wish you had your own boxing robot to throw nasty uppercuts with?  Now you can with the Bionic Bopper Cars, man-sized rock-em sock-em robots that you can battle to the death.  Or until you get tired.

Like bumper cars that punch each other, the toys are designed to ride a human passenger inside who will control their movement and actions.  You can drive it around just like a real bumper car, too, while swinging at everything like a cyborg Manny Pacquiao at a furious pace.

The Bionic Bopper Cars feature a protective steel cage where drivers can sit inside while controlling the boxing robots.  An onboard gas engine powers the hidden wheels, which can keep the thing moving at a rate of up to 3 mph either forward, backward or in a spin (both left and right).  The movement is designed to help you get in position to nail a clean hit, although you can also use it to run away when your robot’s getting badly beat.

Each robot gets a pair of pneumatic-powered arms with tire tread fists that will throw uppercuts when you push on each limb’s corresponding buttons.  Points are only scored when you hit the head, though, with running scores shown on the front-mounted display.   The onboard fuel tank can juice the robot for up to five hours of play on a full load, with a built-in rechargeable 12-volt battery taking care of the electronic components.

We’re not sure how hard these Bionic Bopper Cars hit, so it may not be a good idea to use them when battling alien invaders that come to your home.  Although if you wrap the fist with barbed wire soaked in a vat of glue with broken glass, it could turn out deadly.  Price is $17,000 a pair.