Camper Bike Adds A Mobile Home To Your Pedal-Powered Ride 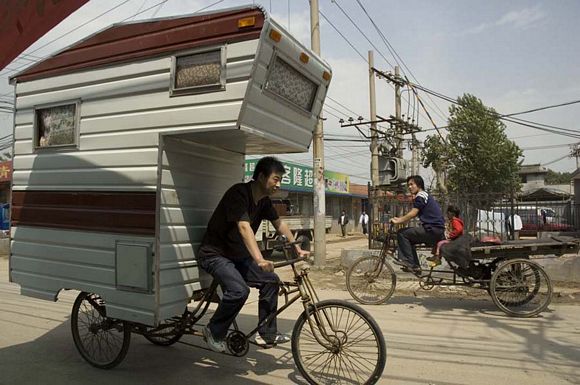 A towable camper is great – if you have a vehicle to attach it to, in the first place.  Luckily, those who have ditched four-wheeled gas guzzlers can also enjoy the same motorhome amenities with the Camper Bike, which loads on the back of a utility tricycle like a pickup camper.

Used as a sculpture concept, rather than a commercial product, the non-motorized mobile home latches on the back end of three-wheeled Chinese bikes (the ones where the cab is in the rear).  With no wheels of its own, its look mirrors that of slide-on trailers, which loads on the bed of pickup trucks. 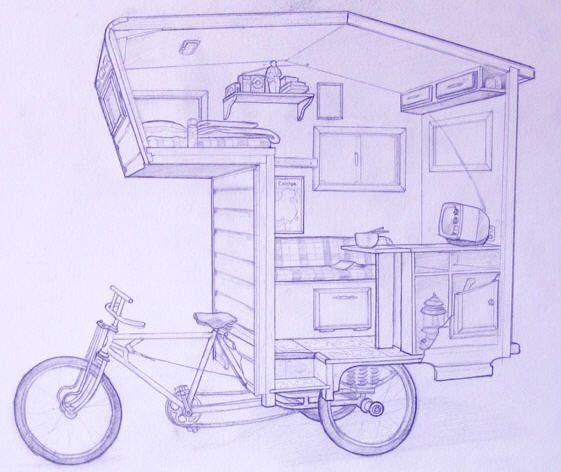 Created back in April of last year, the single-person motorhome is a bit too small for comfort, but should offer a nice place to rest if you get tired of working the pedal under the sun.  Exterior is built out of wood, with a smattering of windows for ventilation and plenty of reflectors to keep the bike visible during nighttime cycling.  Interior packs a full set of undersized amenities, including a small sofa, a table, some shelves and a sleeping area that looks like it can fit two of the seven dwarves side by side (or a small animal).

In all honesty, the Camper Bike looks heavy – which eliminates it from being a very useful camping home.  How the hell are you even supposed to push pedals up an incline with that kind of weight behind you unless you’re Brock Lesnar on juice?  As such, it’s a one-off piece, currently shown off both in its current form and as the novelty subject of a series of paintings.