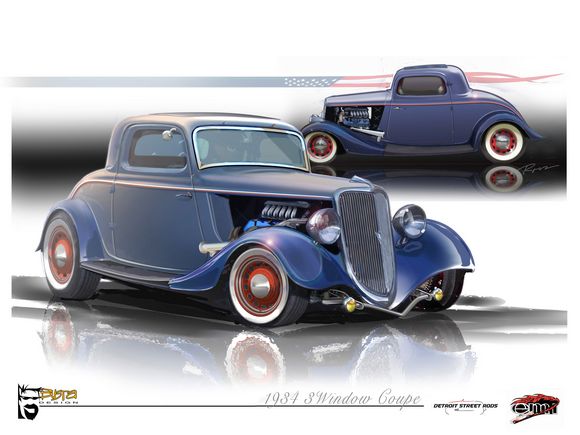 SEMA is approaching near once again, bringing the usual lot of tuned-out cars the event is most noted for.  Ford is reportedly showing off a lot of rides during the show, one of the coolest easily being this EcoBoost-powered ’34 Ford hot rod.

Even though the car itself will garner the most attention, EcoBoost appears to be the real star here.   According to the company, the technology, which they’ll be fitting into most of their upcoming cars, will prove that displacement is not irreplaceable when turning out powerful engines.

Rather than sporting the conventional V8 found in most muscle cars, the ’34 Ford will draw its push from a 3.5-liter twin-turbo EcoBoost V6.  Delivering 400hp and 400 ft/lb of torque, it posts numbers that capably rival naturally aspirated 302 cubic-inch V8 engines.  Apart from the power it delivers, the new V6 will also enable 20 percent better fuel economy and up to 15 percent fewer CO2 emissions than their larger-displacement counterparts.

Building of the car is currently underway, with Detroit Street Rods taking the helm.  The body used is an all-steel “replica” 1934 Ford 3-Window Coupe, which was recently finished by Steve’s Auto Restoration.  Engine configuration was handled by Ford Powertrain.

Like other cars showing at SEMA, the EcoBoost ’34 Ford will get the full tuning treatment, including full fenders, cabin electronics and custom parts.   I honestly can’t wait to see the actual pictures of the finished ride.